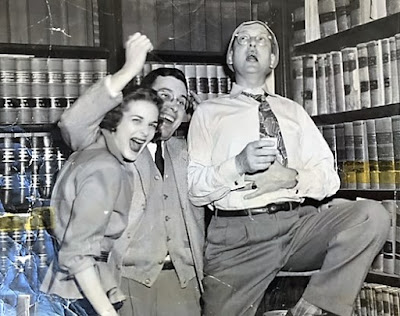 In the house where I grew up, family photo albums were packed into the deep bottom drawer of a desk in my parents’ bedroom. The drawer had to be tugged out slowly before the largest album, leather-bound with black pages, could be retrieved. It was a lot of work for a little girl.

But there is nothing like a child’s fascination with old photographs.

One in particular intrigued me when I was young, causing considerable puzzlement. Now it is 50 years later and much of my parents’ stuff, including the album, is in my possession. So I asked them about it.

The story is that a newspaper photographer snapped the picture, which accounts for its large size. Of course, that fact would have caused even more confusion if I had known it as a child.

The scene is the District Attorney’s office in the Old Courthouse in Dayton, Ohio. The man in the middle is my father. The woman was a secretary (as we used to say) and the other man, who wears a silly hat and holds a cup of booze, was an attorney. Some sort of celebration, my father remembers, “with alcohol.” 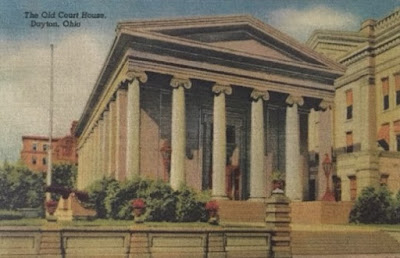 He and my mother had left New York in 1949 and moved to Dayton when my father landed a job as a reporter for the Dayton Daily News. He had a couple of beats, including the courts which were located two blocks from the newspaper offices.

They lived in Dayton for two and a half years. At first, they rented a room in a boarding house where the bathroom could be reached only by walking through the kitchen.

That’s where Darlene, a gorgeous redhead whose grandmother owned the house, hung out smoking cigarettes with her boyfriend, a minor league ball player.

The old lady told my mother that when she was a little girl her father planted potatoes in March and now – in 1950 – the farmers would plant them in May.

Today, my mother is an old lady telling me that they would drive 50 minutes to Cincinnati to go to the theater, and saw Death of a Salesman with the original cast.

Back to the courthouse, I see why the picture unsettled me as a child.

At an early age, we learned to smile politely at the camera and these three people have not followed that rule.

Also, the room looks like a library, and we were taught to be quiet in libraries.

Also, the woman standing so close to my father is not my mother.

Then there’s the guy with the drink. What was he saying? Was something stuck to the ceiling?

And what on earth was SO funny?

The photo is a reminder that children will persistently try to reason through things that don’t make sense.

But in the end, it’s probably just a Christmas party in Dayton, 1950. 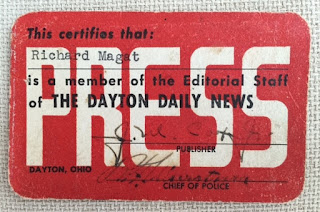 In the Blue Room

An Education in 1930s Suburbia

This is what happened. Gordon and his wife, Helen, returned to the U.S. from Lucknow with no means to earn a living. With their children, they moved in with Gordon’s mother. He lectured here and there on international issues while working on the Socialist Norman Thomas’ 1932 presidential campaign.

The following year, the family moved to Ann Arbor where Gordon studied for an M.A. at the University of Michigan’s School of Education. His thesis about progressive schools somehow drew the attention of the school superintendent of Bronxville, N.Y., who wrote to him in 1934, offering a teaching job at $2,000 per year.

Reflecting on the village years later, Gordon described it as a “company town.” This characterization was incorrect. A company town is controlled largely by one firm on which residents depend for employment, housing, goods, and the like.

In fact the affluent, one-square mile village was dominated by progressive Republicans who made their fortunes in banking, real estate, and retailing. They ran the school board and decided, in the early 1920s, to institute the most modern educational methods and hire the best teachers and administrators.

Unfortunately, Gordon arrived in Bronxville just as new worries about Communism emerged nationwide. While Senator Joseph P. McCarthy would instigate the nation’s second Red Scare during the 1950s, the seeds were planted years earlier when the New Deal stirred concern about Communist subversion.

Gordon fell under suspicion almost immediately. If you were to draw up a list of activities that would provoke most parents of 1930s-era students – well, he hit every one:

-field trips to cooperative housing built by the Amalgamated Clothing Workers Union in The Bronx,

-visits to slums, organized by an interfaith group which taught young people about the living conditions of the poor,

-a dinner with Father Divine, a black minister who ran the Peace Mission, a non-governmental relief agency in Harlem,

-a play presented by the Works Progress Administration,

-meetings with officials of peace and justice groups,

While local residents grew concerned about these and other activities, the superintendent who had hired Gordon departed and was replaced by a more conservative man. In 1937, at a community rally held in the school auditorium, agitated parents yelled about radicalism in the schools and the revolutionary activities of a teacher who could only be Gordon.

Since his contract expired in 1938, it made sense for him to move on.

About 60 years later, while living in Bronxville, I wrote a history of the school, one of the first public progressive school districts in the nation. In the course of reading newspaper accounts and interviewing retired teachers, I learned about Gordon.

Zoom forward to 2002. Gordon still intrigued me. Perhaps there was more to write. And he and Helen were still alive! Hence the trip to Vermont.

However, I soon discovered, sitting around listening and sifting through papers in the attic of their comfortable, disorganized home, that Gordon and Helen had thoroughly documented their lives. Gordon had self-published a book about their years in India and was 88 pages into an autobiographical manuscript. Helen also brought forth an autobiography.

We spent three days together, carrying on nearly nonstop conversation about everything.

With voluminous notes, I returned to Kansas. Over the years, I tried several times to write about him and them, without success.

But recently, I’ve thought a lot about how Gordon found his way in the world.

He believed that he took a wrong turn at Bronxville, and I had reflexively adopted his view:

-he had a bad time of it with awful people,
-he gained nothing from it,
-the interesting stuff came afterward,
-it was not worth an ounce of reflection.

Looking back, this perspective seems flawed.

Gordon dismissed teaching in Bronxville as his least important, most unpleasant experience. Now I’m inclined to think it was an essential experience.

He had returned from Lucknow in exhilaration, having put forth a bold statement about British imperialism.

But he needed to support his family – and it wouldn’t necessarily be on his terms. That was a jolt. Luckily, he could afford graduate school and found a job quickly.

In Bronxville, Gordon and Helen soon learned that life can be brutal in a small community. Unfortunately, they formed lifelong stereotypes of wealthy suburbanites who surely returned the favor.

Yet Gordon forged ahead despite the discomfort. He formed a student Peace Club in 1935. He screened films depicting life in Asia. He visited Russia in the summer of 1937 and lectured about it that fall.

Through various activities, Gordon affirmed his liberalism and started to develop a network of people and institutions that supported the kind of work he wanted to pursue. Although he never again worked as a teacher, he grew professionally.

There’s no question that Gordon knew excruciating details about the plight of the Indians who lived under British rule. He had witnessed the destitution of the Great War refugees. Power, politics, oppression – Gordon had a vast understanding of international issues.

But my hunch is that he possessed less insight into the suffering of Americans at the bottom of the Great Depression. He had a lot to learn.

When he visited those New York slums, his eyes must have opened as wide as those of his students.

Ultimately, four years in Bronxville were not a waste. They enabled Gordon to receive an introduction to his own nation in his own time.