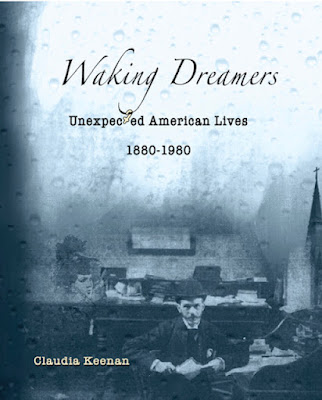 Opportunists, millionaires, student radicals, artists; industrialists, posers, bohemians, suffragists — this set of stories, largely about obscure nineteenth-century Americans — started life as a blog, “Through the Hourglass.” But before that it was a list of men and women over whom Claudia Keenan stumbled in the course of 15 years of historical research. Messianic, tragic, brave, clever; they seemed to merit attention — at least 500 words.

Written at a time when Americans became increasingly interested in digging up their pasts, the blog was an adventure in research through thousands of clues, details, and images. Digitized magazines, newspapers, and books, and genealogical websites were among Keenan’s most important sources. Her interest in reconstructing lives, and providing and interpreting cultural and social context, grew out of her doctoral studies in the history of American education.

Ranging from the modern dancer Violet Romer to the brilliant progressive educator Willard W. Beatty; from the freethinker and vegetarian J. Howard Moore to the forlorn First Lady Jane Pierce, Waking Dreamers: Unexpected American Lives, 1880-1980 pulls back the curtain on Americans who suffered and triumphed through the Gilded Age, entrepreneurs who dipped their toes into fakery, and the early feminists characterized by idealism and independence. Keenan’s parents and grandparents — the latter Eastern European immigrants — make appearances in this engaging book, as well.

Mount Vernon, N.Y. is also a character in Waking Dreamers. It is Keenan’s hometown, a New York City suburb established in the mid-nineteenth century, full of visual clues that embody the era. There are beautiful old homes and avenues lined with elms, and a fraught history of race, ethnicity, and politics. Here, Keenan developed a strong affinity with place and time.
Waking Dreamers has been gorgeously designed by Sandra Moreano to include more than 100 pictures, including old documents and photographs, original art, and postcards.

Claudia Keenan is a historian of American education and culture. She received a BA from the University of Chicago and a PhD from New York University. She lives in Connecticut.