Back to the Future: a century after the 1920 census

An entire century will separate the 1920 and 2020 censuses, so one would think that the issues surrounding the two surveys are as different as night and day. But that is not the case. Immigration and political power were front and center 100 years ago, just as they are today.

The Trump Administration’s decision to add a question about citizenship to the 2020 census has created a national uproar and drawn federal lawsuits and appeals. Opponents argue that adding the question will discourage participation among non-citizens and even legal immigrants, causing an under-count of both of those groups. Using that faulty data, they claim, federal agencies then will apportion resources both inadequately and unevenly, hurting low-income and marginalized communities through the coming decade.

Adding questions to the census is hardly unprecedented.  Since the first census in 1790, the number and type of questions in the survey have been changed periodically. The 1920 census, for example, added several questions.

Some immigrants may have been scared off by concerns about their status. But the people who were really frightened by the prospect of that 1920 census were members of Congress.

What did these legislators fear? Just like today, it was the reapportionment of seats in the House of Representatives. Reapportionment is mandated by the Constitution to assure that representation reflects the distribution of the population. It occurs every ten years, based on census information.

Far more significant would be the shift from rural to urban; the next census would show that – for the first time in American history – more people would reside in U.S. cities than on farms.

Thus, following the 1920 census, the nation would face a major shift in political power. Reapportionment would dictate that less populous states would lose House seats and urban areas would gain them. That was why some rural House members publicly declared, as early as 1918, that the census had little value. Others urged that immigrants be eliminated from the count altogether.

Reapportionment brings a new political balance each decade, but it also can mark significant cultural and social change. Hence the Anti-Saloon League hustled politicians to rush through Prohibition before the House was reapportioned, for a constitutional amendment to ban liquor never would have passed if urban legislators were the majority in the House.

The prospect of such a drastic political realignment led the House Census Committee to violate its constitutional duty by repeatedly postponing and voting down reapportionment after the final census report. It became a perennial dance.

In their first attempt to avoid such drastic reapportionment, Congressional legislators proposed a measure that would have enlarged the House to 500 seats from 435 seats. It was voted down.

In 1922, President Harding said he’d had enough and insisted that reapportionment occur by March 1923. That vote was deferred. And so it went.

In 1924, the census committee announced that it would drop reapportionment because “adoption of the 1920 census would seriously affect agriculture and farming sections.”

If Congress had performed its duty, the Immigration Act of 1924 would not have been enacted. That xenophobic law set severe quotas for Eastern European immigrants and completely excluded most Asians, Indians, and Arabs. And Prohibition likely would have been repealed far earlier than 1933, due to overwhelming opposition among urban residents.

Yesterday the Supreme Court heard arguments about the Trump Administration’s move to add a citizenship question to the 2020 Census. The decision will dramatically affect reapportionment.

However the Court rules, it is remarkable to behold how closely the issues surrounding the 2020 census echo the past. Again we face a major shift in political power – 100 years ago it was toward the cities; in 2020, if the question is included, it may be away from the cities.

Just as significantly, the decision has the potential to stave off the future. When Congress refused to act on the 1920 census for ten years, it put off major changes in American life related to mass culture and the growing presence of minorities. In 2020, if the question is included and influence tilts back toward rural states, we too may be merely postponing a social transformation.

Left-click on images to enlarge them.

Full moon from the train 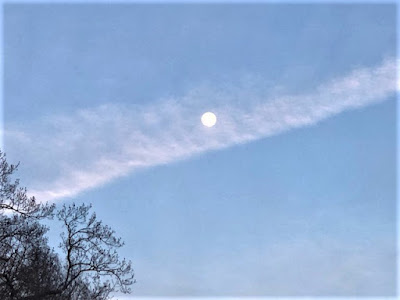 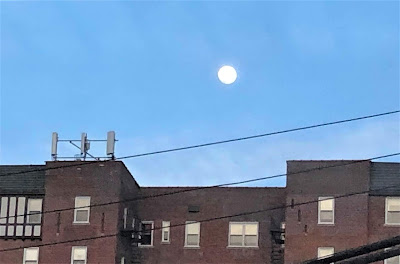 In Peru, Nebraska, the local news channel used a drone to show where the Missouri River had broken through the levee.  The disastrous flood has destroyed fields, roads, and homes during the past month.

I thought immediately of Alexander J. Stoddard, son of a Scottish farmer who immigrated to the U.S. in 1848 at the age of two.  The family settled in southeastern Nebraska, preceding the homesteaders.  The father married twice and fathered nine children.

Several of his children grew up to become teachers, including young Alexander.  But it looks like Alexander was the only one who left Nebraska.  He went on to pursue a brilliant career in public education that carried him east and west across 35 years.

The drama of the Plains – the floods, the droughts, the farming life – that’s what he set out to leave behind.

He started on that path at the Nebraska State Normal School at Peru, a teacher training school.  Normal schools proliferated in the U.S. after the Civil War.  By 1909, when 20-year old Alexander arrived at the hilltop campus, the demand for teachers had been rising steeply since the turn of the century.  Anywhere that you could point to in the country was in need of educators.

At Peru, Alexander became president of his class.  (He also learned to play tennis on the lawn courts.)  After two years, he headed off to the University of Nebraska at Lincoln where he received a B.A.  In 1917, while skirmishing with the Nebraska draft examiners, he married his childhood sweetheart, Sadie Gillan.  They would have two children.

As Alexander continued his education, the family headed east where he earned a master’s degree in educational administration at Teachers College, Columbia University.

Then he soared; advancing from superintendent of schools in the suburban village of Bronxville, N. Y., to Schenectady, Providence, Denver, Philadelphia, and, finally, Los Angeles.  He also led several prestigious national educational organizations.

Alexander spent 65 of his 76 years in the twentieth century.  The sweep of his life calls for an exclamation, or at least a smile:  the same man who traveled by horseback from Peru State College to the city of Beatrice, Nebraska, where he taught school to help put himself through school, also fiercely advocated educational television when it came on the scene during the 1950s.

He was a modern man.

Nevertheless, nineteenth-century realities influenced his life.  The floods that have devastated Peru and other towns in southeast Nebraska echo the vagaries of the weather that would have tormented his father.  Not to mention the Panic of 1893.

Inevitably, Alexander and many of his peers left the Plains. They did not want to live the farmer’s life, and the lure of the city was hard to fend off. Perhaps there are numbers in a book somewhere, but I will guess that hundreds of them became very fine teachers.

In this spring of 2019, Peru State College still overlooks the Missouri River, its campus scattered with oak trees and old brick buildings.  A four-year college with an online extension program, it nods to its earlier incarnation with a School of Education.

Now it’s back in business as the flood waters recede, although irreparable damage has been inflicted on the homes, farms, and roads of southeastern Nebraska.

http://www.throughthehourglass.com/
at Wednesday, April 03, 2019 No comments: