The First Lady is upstairs today 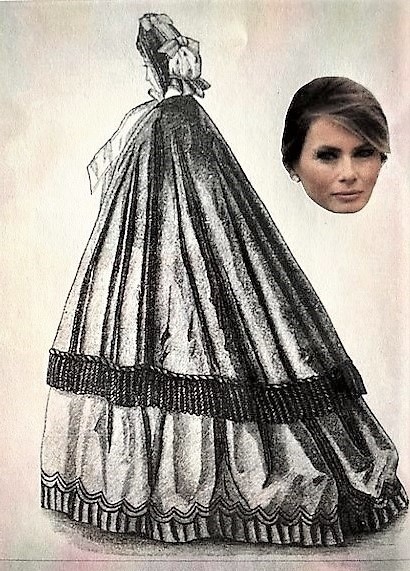 Now that the White House has celebrated Halloween, Melania Trump will retreat once more to the second-floor family residence.  Apart from the turkey pardon and Christmas parties, she probably will appear infrequently in public until 2019.

From the start, this First Lady has been unusually remote; socially and emotionally unavailable to the American people.  She does not wish to conform to the modern conventions associated with the First Lady, which emerged around 1902 during the Theodore Roosevelt administration.

Edith Roosevelt became the first president’s wife to grant routine press coverage of herself and her children.  Such access increased over time.  During the past three decades, as the media grew and the realm of First Ladies scholarship intensified, historians have drawn ever greater attention to the role of the president’s wife, raising expectations that the women will engage fully with the public.
But now, nearly 20 months into the Trump presidency, we must conclude that the First Lady is most interested in engaging with a very small circle of friends and family.

Historically, she is not alone. For antecedents, look to the dark, rainy first half of the nineteenth century.  One might not recognize the names outright, for the women are obscure. Just like Melania Trump, they were reluctant to leave the second floor of the White House.
The women were Margaret Taylor, Abigail Fillmore, and Jane Pierce, three ladies who never wanted their husbands to run for president and definitely didn’t care to move to the capital city that was flourishing at the edge of a swamp.

Not everyone regarded the city with dread.  By 1850, notwithstanding the summertime mosquitoes and damp winter chill in the president’s house, Washington, D.C. captivated many a visitor. None other than the vivacious Dolley Madison (wife of the fourth president) made things sparkle. She hosted brilliant salons and encouraged the White House ladies who followed her to step lively.
Dolley died in 1849, the year before Margaret Taylor arrived at the executive mansion.  But it mattered not to Margaret, Abigail and Jane, who brushed off society and politics and participated in few White House events.
To be sure, they had reasons.
Margaret grieved for her daughter, the first wife of Jefferson Davis, who died of malaria while visiting Louisiana during “fever season.”

Jane mourned the loss of her 11-year old son who died before her eyes in a train accident less than two months before her husband was sworn in as president.
Abigail’s health was poor.

In turn, the three women stayed upstairs, read the Bible, and welcomed a few friends to the parlor.  They sent their daughters and nieces downstairs to receive visitors and preside over dinners.
The wives of presidents Taylor, Fillmore and Pierce were cast from the antebellum feminine ideal that historians refer to as “the cult of true womanhood,” which was fostered by a patriarchal system. The ideal virtues were piety, purity, submissiveness, and domesticity.

Melania Trump conforms, in part, to the type. Her adventures in modeling took her where no First Lady has gone before, so one might cross off purity. Her manner is largely compliant, however, and she prefers to be at home.
And so there exists an odd affinity on the second floor of the White House.

On one hand, here is a woman who owes her rise to the twenty-first century’s lack of inhibitions.  On the other hand, there are three Victorian ladies dressed in black gowns with stiff lace bodices, bent over their embroidery and asking for smelling salts.

The Wonderful World of Waldemar Kaempffert

Think fearlessly of Waldemar Kaempffert, one of America’s first and most prolific science writers, striding onto the scene.  His blue eyes are brilliant and his hair prematurely gray.

In 1919 he scolded the New York Times about the proper usage of the word “blimp”:

The R-34 is a rigid dirigible of the Zeppelin type. It has very little in common with the “blimp.”

Really, how could he help but correct the mistakes that assaulted him at every turn?  Not only was he bright and analytical.  He also held strong opinions about nearly everything:

The existence of canals on Mars,

the patent rights of inventors who worked for large corporations . . .

Waldemar Bernhard Kaempffert was born ambitious in New York City in 1877, the son of a German immigrant father and a Russian-German mother.  He received honors and awards all through his years in public school on the Upper West Side.

Soon after graduating from City College in 1897, Waldemar joined Scientific American as an assistant editor.  This gave him quite a perch, not to mention prestige.  He went on to earn an LL.B. from NYU while continuing at the magazine.  In 1905 he published his first major article, “The Protective Mimicry of Insects,” in Booklovers Magazine.

Then he was off and running, covering carbon and Tungsten light, weather forecasting, alternative uses for pneumatic tubes – everything new that emerged through the scientific method or from someone’s crazy imagination.

For Waldemar had arrived at his profession at just at the right moment.  Radioactivity was revealed in 1895.  That led to the discovery of atomic particles.  The microscope lit up ever more infinitesimal lifeforms.  And the First World War would spur major advances in technology and medicine.  Waldemar was among the first Americans to grasp the extent to which German scientists had outpaced the United States and England.

During the war, Waldemar left Scientific American to become editor of Popular Science Monthly, where he stayed until the mid-twenties when he joined the New York Times.  On the beat, he covered the invention of television and the radiotelephone, and the first transatlantic call between London and New York.

Waldemar would write thousands of articles on scientific topics as well as several books.

He did have a break from journalism.  In 1928 he was called to Chicago where the businessman and philanthropist, Julius Rosenwald, planned to create a science museum inside the last remaining building of the 1893 World Columbian Exposition.  During a trip to Munich in 1911, the multimillionaire had been deeply impressed by the Deutsches Museum, which was -- still is -- the world's largest museum devoted to science and technology.

In need of major repairs, the exposition building was located in Jackson Park in the Hyde Park neighborhood along Lake Michigan.  Ultimately it would be recast in limestone, thus keeping its Beaux Arts exterior.

Rosenwald charged Waldemar with designing exhibitions and assembling the curatorial staff.  The mission of the new museum – like the one in Munich – would be to demonstrate how science and technology transform culture and society.

By 1930, Waldemar’s wife Carolyn, a concert pianist, had joined him in Chicago and the couple moved into an apartment hotel just a few blocks from the museum.  But something went wrong; not quite a scandal but certain irregularities that led the board of directors to push Waldemar out.  In 1931 he headed back east to ask the Times editors to give him back his job, and they agreed.

Until his own death in 1956, Waldemar remained busy writing several stories each week. In his obituary, the Times quoted Waldemar himself, who often said that his function was “to make science so clear that the scientists could understand it.”

A childless widower, Waldemar bequeathed more than $25,000 to Memorial Hospital for cancer research.*  He left $5,000 to Dr. Elizabeth Baker, a social scientist at Columbia University who studied the effect of technology on jobs.  He left $2,500 to Marie Mossoba Berlinghoff, his assistant of nearly 25 years.

The remainder went to a stage actress named Sophie Wilds, who seems to have pursued a Bohemian life from her little brick house in Greenwich Village.