Conjuring the Past in Brunswick, Maine

It’s July of 1910 and Joshua Hawkins Jordan is about to close his shop on West Thirty-Third Street and head to Maine.

J. H., as he is known, can afford to take a break.  He’s a 52-year old dealer in old prints and engravings for whom the past few years have been quite profitable.  Early American art is in great demand and so is J.H.’s expertise.  His store is flourishing while he earns generous fees for advising wealthy collectors.

Right now, though, he’s counting the minutes until he will drop a line in the Androscoggin River near Brunswick. The bass await him.

It’s not clear which came first, J.H.’s passion for fishing or his marriage into one of Maine’s famous seafaring families.  By 1892, when he wed Isabella Wilhelmina Curtis – known as Belle – her legendary father and grandfather had been gone for many years.

It did not matter that J.H. had never met them.  He knew all about their spirit.  You couldn’t be a successful print dealer if you lacked an affinity with the land, sea, and skies of America’s first century.

Maine had been home to his wife’s family since the 1700s.  Belle was one of eight children born to an intrepid sea captain, John Curtis, and his wife, Leticia.  After Captain Curtis’s death, Belle’s older brother William became the family patriarch.

Girded for the Gilded Age with a full beard and mustache, William headed to New York City to attend Columbia Law School.  He quickly made partner at the law firm which organized the U.S. Steel Corporation in 1901.

After William became the company’s first president, which was the miraculous way of business in those fortunate years, he bought a Beaux-Arts mansion on Fifth Avenue where he lived with his wife and five children.

But Maine was ever in William’s heart, so he built a cottage in Camden overlooking Penobscot Bay.  This sprawling house with a deep wraparound porch was called Portlaw – the name of his father’s ship which in 1870 put in for repairs at Bermuda, where a typhoid epidemic claimed the captain. 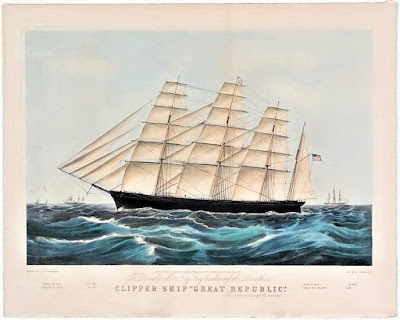 Charismatic and humble, weighing in at 325 lbs., John Curtis could have boasted of many feats, including the rescue of his entire crew from a burning ship called the Windsor Forest as it sailed from Liverpool to Bombay in 1864.

John’s father, Captain Christopher Curtis, also died a long way from home.  In 1839 he succumbed to yellow fever in Natchez, Mississippi, where he and a partner owned a line of packet ships that ran between Maine and Mississippi.  Christopher Curtis is buried in a tiny cemetery ten miles east of Natchez.
The Curtis children revered their sea captain forebears.  In 1904, William established Brunswick’s Curtis Memorial Library in honor of their father. Perhaps a bit of a hothead, William had told Andrew Carnegie to get lost when the philanthropist offered to endow a library for the town one year earlier.

That took some nerve considering that Carnegie turned down many requests but was never rejected anywhere as he proceeded to build libraries all over the United States.

Belle had none of that sharpness.  Six years younger than her brother, she was surely the kind, thoughtful woman who appears in a series of Ancestry.com photographs that spans five decades.

Like William, Belle left Maine for New York City.  It had been while working as a nurse during her early 20s that she resolved to become a doctor.  Most likely she met J.H. during the years she studied at the New York Women’s Medical College. 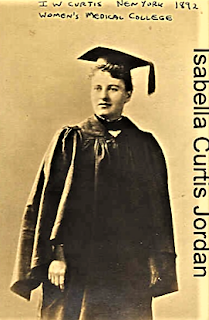 Born in Saint Martin, Dutch West Indies around 1860, J.H. was the eldest son of a widowed Irish-born minister who brought his family back to the U.S. after the Civil War.  J.H. found a niche in the swirling city, ambitiously working his way up from clerk in a print shop to general manager of prints at G.H. Richmond, a prominent book dealer.

He had large dark eyes and a dimple in his chin which would soon be covered by a goatee.

Belle graduated from medical school in 1892, but there is no public record of her work as a physician.

Three children came along while J.H. went out on his own to specialize in rare engravings and etchings.  He became well-known among the millionaire likes of his brother-in-law, who competed for a dwindling number of valuable prints.

Many had made their money in real estate.  Somehow the same men who transformed old New York into a metropolis were captivated by pictures of country lanes and quiet harbors.

J.H. worked as a dealer and appraiser until his death in 1932.  His most famous sale was a handwritten account of Lincoln’s death by a surgeon who accompanied the president from Ford’s Theater to the Petersen House and held his bleeding head until dawn.

By July of 1910, the twentieth century was showing its true colors.

Meanwhile, in time suspended like an old print, Belle and J.H. and William and their families passed their summers on the wild coast of Maine.