The Editor at Bat

At the turn of the twentieth century, Jacob J. Goldman and his brother Michael were chugging along in the garment business in New York City.  Their company, Gold Quality Skirts, manufactured skirts for women and girls.

They were the sons of Jewish immigrants who arrived in the U.S. before the Civil War and settled in Baltimore.  Their father Samuel had brought a trade from Poland:  he was a tailor who specialized in hoop skirts.

Therefore, it is not surprising that Samuel’s sons went into women’s apparel.  By 1880, Jacob had moved to New York to start his career.  Michael soon joined him.

At that time, the “needle industries,” as some called the garment business, occupied large swaths of Manhattan.  As far north as Fiftieth Street all the way down through the Village and ending east of City Hall, women’s wear was manufactured in tenements and factory buildings where immigrants toiled over sewing machines and other equipment or worked by hand.  These places were known as sweatshops.*


Around 1900, the International Ladies Garment Workers Union (ILGWU) began to demand better working conditions and humane treatment of workers.  In 1909 they scored success with 14-week strike in which 20,000 women participated.

That same year, the Goldman brothers met their own kind of success with the new Goldman Costume Company.  By 1910, J. J. was ensconced on Riverside Drive with his wife Lollie and their two children.

Then J. J. had an idea. It may have arrived via his daughter, Bessie.  Perhaps she brought the Betty Wales books to his attention in the same way that Walt Disney’s daughters showed him Mary Poppins.

Either way, it made for an unlikely pair:  Jacob Josiah Goldman and Edith Kellogg Dunton – Smith College graduate and author of the bestselling girls’ series Betty Wales.

The daughter of a judge, Edith was born in Rutland, Vermont, in 1875.  At the age of 18, she entered Smith, where she flourished as a writer.  After graduating in 1897, she worked as an English teacher in Rutland.  She also managed publicity for Smith, and received praise for her clever public relations strategies.

Then inspiration struck.  Edith decided to write a series of books for girls, all starring a capable young woman named Betty Wales.  There would be eight books, from Betty Wales, Freshman (1904) to Betty Wales, Business Woman (1917), all published by the Penn Publishing Company in Philadelphia.  Edith used the pseudonym Margaret Warde although her fans soon uncovered her identity.

Many aspects of the stories seem autobiographical as Betty makes her way through the fictional Harding College and out into the world, surrounded by a circle of devoted friends.  The books were promoted as “college stories” about modern young women.  They quickly became bestsellers.

Now here came J. J. Goldman with a proposal for Edith and the Penn Publishing Company.

J. J. wanted to create a clothing line for younger women featuring a stylish, contemporary look.  He planned to call the line “Betty Wales Dresses,” and hoped to harness the popularity of the books and its heroine.

The deal was sealed in 1915.  Within a few years, J. J. renamed his company Betty Wales Dressmakers.  Eventually, after his brother Michael died, he manufactured only Betty Wales dresses.

Ever the innovator, dubbed “father of a great idea,” J. J. devised all sorts of gimmicks to build the brand.

His opening gambit was that every woman who purchased a Betty Wales dress would receive one of the books.  In the early 1920s he staged a contest guaranteeing a free dress to booksellers who sold a certain number of Betty Wales books.  Another contest asked for slogans; yet another for essays on “Why customers buy Betty Wales dresses.” 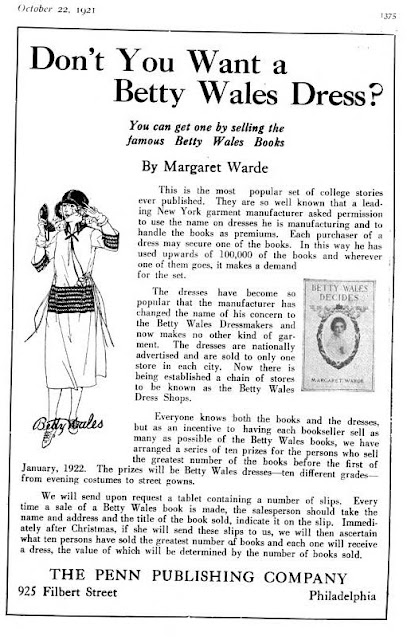 As sales rose, J. J. spent heavily on advertising, especially in women’s magazines.  No one had done that before.  Patent medicine and soap?  Those items had been advertised for years in the Ladies Home Journal.

But never a women’s clothing brand.

J. J. decided to make Betty Wales dresses available exclusively at one store per city, and eventually, he started a chain of Betty Wales Dress Shops.  By the 1930s, a kind of fervor surrounded the dresses, as reported in The American Cloak and Suit Review:

Betty Wales is a practical Twentieth Century personification of an idea, with the power to materialize to the modern girl or young woman in the form of a dress, a smart, refined, wearable and original dress, more dear to the heart of a girl than any legendary Goddess.

The dresses were popular through World War II and lingered into the early 1960s, although J. J. had long since sold the business and moved to Florida.  He died in 1948.  Edith spent most of her life in Rutland, where she died in 1944.  Penn Publishing continued to turn out juvenile book series through the postwar era.

And Betty Wales – she lifted her lamp beside the golden door of merchandising. 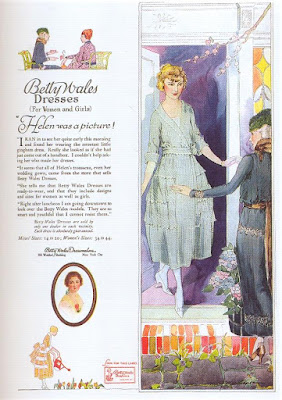 *The 1911 Triangle Shirtwaist Factory Fire killed 145 young women who could not escape the sweatshop because the doors were locked.  That tragedy led to major reforms demanded by organized labor.

http://www.throughthehourglass.com/
at Wednesday, September 18, 2019 No comments: