Evidently New York City’s pigeon population is declining, and the English sparrow and European starling have assumed most-hated status. It’s hard to imagine that once upon a time sparrows were so desirable that the city built houses to keep them happy.

Originally, officials decided to import the birds from England to fix an urgent problem: caterpillars were munching on the leaves of shade trees. It was believed that the sparrows would eat the caterpillars.

During the 1850s, Brooklyn tried several times to establish a population but the birds kept dying. Finally, several broods were let loose at Greenwood Cemetery and a man was hired to tend them; they flourished.

Soon enough, the city of Portland, Maine, acquired its own sparrows. Then Boston brought them to the Common. During the Civil War, hundreds were set free in the parks of Manhattan. By the 1870s, Philadelphia, New Haven, Galveston, Salt Lake City, and San Francisco had large sparrow populations.

As the sparrows multiplied, Americans grew frustrated. The birds nested everywhere and ate crops. In 1903, the editor of The Warbler, a magazine devoted to North American ornithology, wrote, “The bird has now overrun the entire country and is a most serious pest.”

And in 1917, the Federal Government announced:

The U. S. Department of Agriculture scientifically investigated the contents of the stomachs of a large number of English sparrows, and reported that, aside from the destruction of weed-seeds, very little is to be said in the English sparrow’s favor. In reference to the insects destroyed this statement is made: ‘Out’ of five hundred and fifty-two stomachs inspected by the Biological Survey, forty-seven contained noxious insects, fifty held beneficial insects, and thirty-one contained insects of little or no importance.

What a waste. But nothing could be done.

Fortunately, there’s one pleasing relic of the sparrow’s halcyon years:  a wood engraving of a giant bird house in Manhattan’s Union Square Park, circa 1869. Its creator, Stanley Fox, worked as an illustrator for Harper’s Weekly, the leading news magazine of the day, where the picture first appeared.

Mr. Fox was born and lived much of his short life in rural Little Falls, N. Y., 200+ miles northwest of New York City. The town lies in a deep gorge of the Mohawk River. Its dairy farms thrived because the Erie Canal passed right through.

In 1865, when Stanley Fox started working for Harper’s, the editors sent him south for the last year of the Civil War. He drew Fort Sumter and black soldiers arriving at Hilton Head. His picture of President Andrew Johnson pardoning rebels at the White House snagged the magazine’s cover.

After the war ended, Fox returned to Little Falls but continued to work for Harper’s. Now the editors wanted illustrations of topical urban scenes, which often required Fox’s presence in the city. He must have commuted back and forth on the New York Central Railroad.

Stanley Fox’s engravings are not in the same league as the work of Winslow Homer and Thomas Nast, who also contributed to Harper’s Weekly.

However, in addition to the sparrow palace at Union Square, Fox nicely captured various scenes around town: a thoroughbred horse race, a blizzard, a county fair, the Central Park Zoo, and boys swimming in the East River.

When the destitute widow Mary Lincoln exhibited her wardrobe in New York City, hoping to raise money by selling her gowns, furs, and jewelry, Fox’s drawing helped promote the show.

And on May 30, 1868, Fox visited a Brooklyn cemetery to sketch visitors decorating the graves of the Union dead.

Many of his drawings were gritty:

The indigent pleading for mercy at Jefferson Market Court in Greenwich Village  . . .

A police wagon dumping a motley crew of men, women, and boys at New York City’s notorious prison, the Tombs . . .

Identifying the dead in a morgue . . .

A horde of adults and children in a bar, “evading the excise law – laying in rum for Sunday.”

One of the striking things about Fox’s engraving of the “Sparrow Hotel,” as the New York Times referred to it, is its resemblance to a nineteenth-century print of farmers shooting the passenger pigeons that used to fill American skies.

During the very same years that the sparrows thrived, the over-hunted passenger pigeon became extinct.

My mother has forgotten many things but not the luncheonette that her parents owned at 23 East 20th Street in Manhattan.  These days the neighborhood is very fashionable, known as the Flatiron District. During the 1930s, however, it was largely given over to manufacturing.

Of course, as goes the urban cycle, the area was home to affluent New Yorkers through much of the nineteenth century.  In 1858, Theodore Roosevelt came into the world in a brownstone at 28 East 20th Street.  An American flag waves out front, as it did in the thirties.

At the little restaurant, one could have breakfast and lunch Monday through Saturday.  The customers were largely factory workers from the cast-iron buildings that clustered around Broadway, which cuts across a large slice of Manhattan from west to east.

The Flatiron Building rises where Broadway crosses Fifth. In its shadow, the blocks are short with little sunlight.

My mother recalls a well-muscled guy who looked just like Tyrone Power. He worked in a carpet factory around the corner. On Saturdays when he came in for lunch, she sat at the counter, sneaking glances.
In addition to Tyrone Power, there was Frank, the sandwich man. In 1939, Frank went west to work for Boeing, where he would earn a lot more money.
My grandmother handled the cash register and my grandfather was the cook.

One day, a man in a fancy suit entered the restaurant. He held his hand in his pocket, as if he had a gun. He said to my grandmother, “How many guys you got working here?”

He wanted to know if there was organizing to be done.

He went into the kitchen and spoke with Frank and the dishwasher. After a few minutes, he left the store.

In 1932, at the bottom of the Depression, a customer asked if he could get a meal in exchange for drawing a picture of my mother. 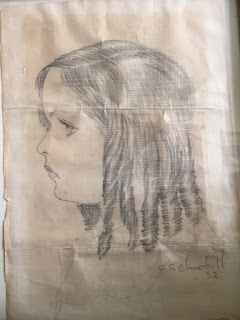 The luncheonette also was the scene of her tenth birthday party.  That is her last memory of East 20th Street.  One year later, her father sold the restaurant to his cousin Murray and bought a luncheonette further uptown, on Broadway between 39th and 40th Streets, close to Times Square.

From there it was a short walk to the Capitol Theater where The Wizard of Oz opened in 1939.  She remembers prancing up Broadway with her mother and a friend, full of eager anticipation.

Before the show, Judy Garland came on stage.  Everyone was shocked.  The actress had become chubby and wore her hair in short blonde ringlets, but she sang beautifully.

In a way, the luncheonette was a snapshot of the 1930s.  A square meal, a job, the advancing war, and the lift that came from finding a movie star, real or imagined, in your midst. 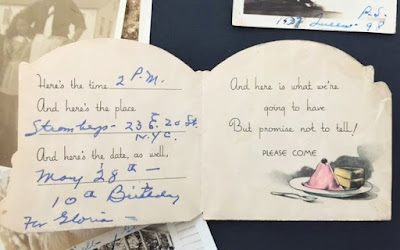 Some archives are worse than others. The chairs may be uncomfortable, the lighting poor, the taking of photographs forbidden.

Not so at the sun-filled library of the New-York Historical Society, with its two-story ceiling, swirling staircase, and creaky wooden card catalogue. Plus, everyone is friendly and helpful.

Therefore it’s hard to believe that once upon a time the place was haughty and insular. One of its defining characteristics was the requirement that new members be proposed by existing members. Subsequently, the trustees would meet, discuss various prospects, and make a decision much in the way of a country club.

This elitist system continued into the 1920s even though the Society desperately needed to expand its base in order to raise money. In 1908, the trustees had bought land and constructed a new building on Central Park West. Operating costs rose even as architects drew up plans for additions. 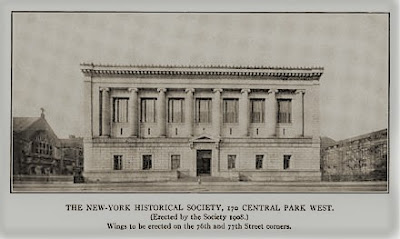 Through it all, the Society’s librarian, Robert H. Kelby, quietly went about his business, researching and writing; parrying inquiries. Visitors dropped by for lectures and little else.  The mission of the Society was not abundantly clear.

Then something happened in 1917.

Mrs. John King (Maria) Van Rensselaer, a Society member and descendant of one of New York’s oldest Dutch families, kicked up a fuss at the annual meeting.

According to those present, May, as she called herself, told the Society members that their institution was “dead.” Here’s what she said:

With the hordes of immigrants due to arrive here after the war, it is essential that some organization take enough interest to supply them with new national figures, history and folklore of this country and city, to take the places of those they had to leave behind. They will come to us full of illusions of America, the land of the free, and will find New York gasping under its load of munition millionaires, careless and spendthrift.

Washington and Lincoln are our only national heroes, and even they will seem remote enough to the immigrant landing at Ellis Island. It is our duty, and we shall hope to assimilate these new peoples without danger to our society and civilization, to make them over anew. The New York Historical Society can supply the straw to make bricks from the foreign mud and water…

During the past century, the goal of Americanization has become controversial. But in 1917, Mrs. V. R.’s words were quite progressive and way too much for the trustees, who pushed back. One year later at the annual meeting, she again urged change before storming off. In 1920, she established the Society of Patriotic New Yorkers, a branch of the Colonial Dames of America -- which she had founded in 1890.

Ironically, the Colonial Dames of America started as an exclusive organization whose members all descended from Colonists.

In 1923, a startup called the Museum of the City of New York came on the scene. According to its founder, a Scottish immigrant named Henry Collins Brown, the new museum would “educate the schoolboy and inspire the immigrant.”

A popularizer of the city’s history who once referred to himself as a “remembrancer,” Brown had many dealings with Kelby, the New-York Historical Society librarian, and his successor Alexander J. Wall.*  Brown often borrowed pictures from the Society’s collection and reproduced them in his books. Like Mrs. V. R., he urged Kelby and then Wall to coax the Society into the twentieth century.

Meanwhile, Henry Collins Brown assembled a board for the Museum of the City of New York. Next he prevailed on the city to donate the dilapidated Gracie Mansion, overlooking the East River, as a temporary home for the museum. Built in 1799 as a country estate, Gracie Mansion would undergo the first of many restorations.

After being named director of the Museum of the City of New York, Brown moved his wife and young daughter into the mansion. That may have been one of the reasons why the board ousted him in 1926.

Suffice it to say that the Society’s librarian, Alexander Wall, was unhappy to learn about the new museum. After Henry Collins Brown wrote to him that “We are a going concern,” Wall replied: 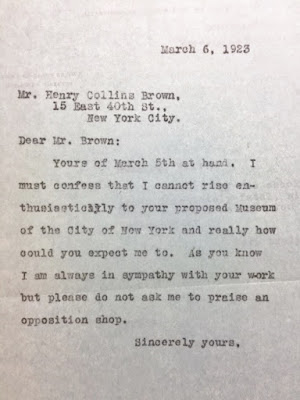 For some time there would be bitterness and rivalry. Eventually, each museum would find its place.

*Mr. Wall's real name was Wohlhagen, but the Society's trustees asked him to change it when the US entered World War I in 1917.