My acupuncturist is located on Baxter Street in Chinatown, his office wedged between storefronts that are occupied mostly by bail bondsmen.  They serve the municipal courts, just a few blocks away.

I take the subway to Canal Street and walk east past the street vendors.  Glancing downtown, I can see the Municipal Building – a wedding cake designed by McKim, Mead & White and completed in 1914.

Even before it was built, the Municipal Building drew controversy.  The landmarks preservation movement would not emerge for another 60 years. But plenty of antiquarians objected to further disrupting a sedate civic center that dated to 1800.  City Hall Park had already been assaulted by a garish Beaux Arts post office, not to mention the Tweed Courthouse, an enduring symbol of nineteenth-century political corruption.

The antiquarians didn’t stand a chance.  Besides, the 60-story Woolworth Building had just risen nearby, and without a doubt the city was going UP.

By 1984, when I started to work there, the Municipal Building had become shabby with a bit of a roach problem.  Yet fun still could be had since the marriage bureau was located on one of the lower floors and you never knew who would get in the elevator.

The city’s radio station, WNYC, had called the building home since 1922.  It broadcast from crumbling quarters in the tower at the top.  I came on as an assistant to the director, Mary Perot Nichols, who began her career as a reporter for the Village Voice.

Mary and her family had moved to Greenwich Village in the early 1950s.  As she became involved in the neighborhood, she kept asking Dan Wolf, then editor of the Voice, why no one was covering Robert Moses’ plan to build a highway through Washington Square Park.*  Finally, Wolf gave her the assignment.

Within a few years, Mary became one of the city’s foremost investigative journalists.  She had dirt on every New York politician and surely that included Mayor Ed Koch, to whom she owed her WNYC appointments in 1978 and 1983.  Mary had resigned in 1979 after Koch ordered the creation of a show nicknamed the “John Hour,” wherein the names of men arrested for patronizing prostitutes would be read on the air.

The idea, absurdly, was that the men’s embarrassment would lead to a decline in prostitution.

The “John Hour” aired once.  An enraged Mary stormed off.

But now it was 1984 and Mary had saved the station by creating the WNYC Foundation and populating its board with movers and shakers.  Formidable and rollicking, she loved her job and thrived on people dropping in and out of her office all day long.  For snacks, she kept a large jar of cherry-flavored chewable Vitamin C tablets on her desk in the same way that my grandmother kept a crystal dish of hard candy on her coffee table.

There was always a crisis, or perhaps Mary’s idiosyncrasies made it seem so.

One incident was unforgettable.  It involved the city’s Board of Estimate, on which sat the borough presidents, a motley crew representing Manhattan, the Bronx, Queens, Brooklyn and Staten Island.**

This board mattered a great deal because the city still funded a significant portion of WNYC’s operating expenses, and Mary needed to nail down every vote.  So each year the station prepared a detailed report to convince the borough presidents of the station’s worthiness.

The Queens borough president was an affable, beefy Democratic pol named Donald Manes.  He insisted that Mary pay a visit to his house to discuss the vote.  Mary asked me to come along – my one and only ride in a city car.

We were ushered into the house through the back door.  The air was filled with cigarette smoke.  At the kitchen table, surrounded by men in dark suits, sat Mr. Manes.

Mary squeezed in next to him.

“Donny,” she said, cutting to the chase. “Have you had a chance to read the report?  We sent it to your office a few weeks ago.”

He looked at his palms, then turned them over.

“I read it,” he said mournfully, and paused.  “But these days when I read, I don’t retain.”

Everyone stared down at the table.  How shocking to see Donald Manes this way: small, sad and distracted.

And sure enough, there was a reason.  Within two years, the FBI would implicate Manes in all kinds of payoffs, kickbacks, and patronage.  The web of corruption engulfed several city agencies and many officials.  In March of 1986, facing charges of extortion and bribery, Manes stabbed himself to death with a kitchen knife.

Just seven months later, the Mets won the World Series and Queens sat on top of the world. Alas, too late for Donald Manes, municipal tragedian.

*Robert Moses, an influential developer known as “the master builder,” zealously constructed bridges, parks, beaches, tunnels, and roads during his reign, mid-1920s to early 1960s.  He met his match at Washington Square Park, where urban activist Jane Jacobs led the opposition to his proposed highway.
**The Board of Estimate was disbanded in 1989 after the U. S. Supreme Court declared it to be unconstitutional.

Frank Bergen Kelley’s mother descended from Dutch burghers. They peered from the frames of their oil portraits, clasping silver goblets while hunting dogs lurked in the background.

His father emigrated from Dublin to New York City when he was a young boy and grew up to become a Methodist minister.

The family lived all over New York State, wherever the minister had an appointment: Kingsbridge, Yonkers, Franklin, Pleasantville, Hartsdale and many more towns.

But the passion of Frank Bergen Kelley always lay in one place. It was the history of New York City.

Frank couldn’t wait to get to a place where he could influence how new immigrants, in particular, would learn the history of their nation.  Planning to become a teacher, he earned three degrees from City University of New York, emerging with a doctorate in 1895.

Then he set off to teach at several military academies before landing, in 1899, at DeWitt Clinton, one of the city’s preeminent public high schools which drew boys from across the socio-economic and ethnic spectrum.

For the next 34 years, this would be the perch from which Frank sparked the connection between citizenship and education.  He did not frown on flag-waving; rather, he believed that a deep understanding of history would nurture the most meaningful, enduring patriotism.


Soon enough, Kelley came to the attention of the leaders of the City History Club of New York.  Established in 1896, the club was run by a mix of Gilded Age millionaires, the heirs of Knickerbockers, and socialites, with a sprinkling of antiquarians and genealogists.

The club “exists for Americanization,” its founders stated.  “To develop a better and more intelligent citizenship by means of the study of the history and traditions of the city, and the lives and deeds of the men who have made this city great . . .”

The trustees invited Frank Kelley to become superintendent of the club.  He accepted with delight.  What a perfect fit:  while the board raised money by hosting balls and auctions, Kelley created an educational program comprised of lectures, self-guided tours, and exhibitions.  It was publicized widely.  Recent immigrants especially were encouraged to enroll.

In rapid order, Frank produced at least 12 pocket brochures, including:  A Guide to Greenwich Village, A Guide to Fraunces Tavern (where General George Washington, in 1783, bid farewell to the officers of the Continental Army).  The board of education distributed these free of charge.

And he lectured all the time, all over the city, in libraries and halls and schools.  Each year he would deliver several series of ten talks, open to the public at no charge, on “The History and Government of New York City.”  Five Sunday afternoon excursions were part of each series.

In 1903, more than one million New Yorkers attended public lectures.

By 1906, when the City History Club celebrated its tenth anniversary, its programs were thoroughly entwined with the work of the public schools.  This meant that the club’s officers, trustees, vice presidents, and advisers had a stake in the education of all children who lived in New York City. 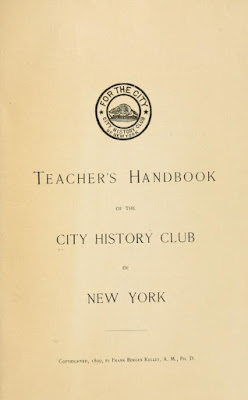