Richard Hayley Lever is not considered an exceptional artist, although some of his paintings are very pretty and appear in the collections of important museums.  They are rarely displayed, however.

Perhaps his brightest moment came in 1924, when President Calvin Coolidge commissioned him to paint a picture of the presidential yacht, the Mayflower.  The dour Coolidge always took an awkward photograph, and the one wherein he accepts the painting is the same.

Born in Australia in 1876, Hayley Lever studied painting in England.  He became captivated by the wild sea and countryside at Cornwall, a peninsula at the southwest corner of England. Just before World War I, he left England for New York where he became friendly with George Bellows, John Sloan, and other artists who comprised the “Ashcan School.”

The Ashcan painters were urban realists who coalesced during the early twentieth century in reaction to the Impressionists who had dominated painting for at least three decades.  Ashcan subjects included tenements, immigrants, and streetscapes.

In New York, Hayley Lever became a member of the National Academy of Design, a prestigious honorary association of artists.  He also taught at the Art Students League, although the school does not list him among the famous artists who trained or taught there. Every summer he traveled to Gloucester, Mass., to paint the ocean and boats that reminded him of Cornwall.

During the early 1930s as the Depression set in, Hayley Lever fell on hard times.  He was forced to sell his home in New Jersey and faced limited options.

Fortunately, he received offers to run studio art clubs in two communities just outside of New York City.  As a well-known East Coast painter, he must have been considered quite a catch.


The artist probably didn’t earn much of a living, but he was of the moment.

Through the 1920s, as the upper-middle class gained leisure time, a hobbyist culture had emerged in the U. S.  Wealthy men and women took up golf, bridge, ham radio and the like.  Civic involvement and club activities increased steadily until 1930.

Eager to stay busy and develop their interests, many suburban women were drawn to painting. Unsurprisingly, Hayley Lever’s plein air classes became very popular as he took students around to lakes, a waterfall, a harbor, and woods.

Considering his love of nature, one might imagine that he lived in a pretty place.  But that was not the case.  He lived on a busy street, in a room in a bungalow overlooking a deep stone railroad cut where the New York-New Haven trains came through.

It’s those Ashcan scenes which he knew by heart, and painted again and again during the last two decades of his life.

So many odd advertisements appear in the pages of old magazines, quaint and strange to our twenty-first-century eyes.

How about Educator Crackers?  They were invented by a New England dentist during the 1880s.  After three decades of practicing dentistry with a foot-treadle drill in a dark office, he could not bear the sight of his patients’ rotten teeth.  Around the same time, an unsmiling man named Horace Fletcher was running around the country promoting “Fletcherism,” the practice of masticating food until it just ran down one’s throat.

The dentist, William L. Johnson, drew inspiration from Fletcher.  He decided that Americans’ teeth were being ruined by too much soft food, especially easily-downed crackers made of white flour.  He devised a new recipe whose ingredients were whole wheat flour and water, and which would require a great deal of chewing.  Dr. Johnson’s family baked the crackers at home and he gave them away to his patients. 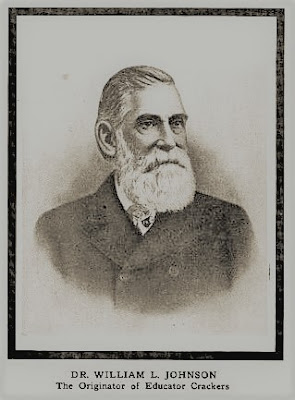 The dentist named them “Educator Crackers” because he hoped to educate people about nutrition and diet.  Within a year, the crackers became so popular that he started to think about giving up dentistry and going into business.  But it was 1885, he had reached the age of 60, and he just wasn’t sure about entering a new profession.

So Dr. Johnson asked his daughter, Nora Bird, for help.  Twenty-five years old, ensconced in a Victorian household, she saw an opportunity for herself and her father.  At Nora’s urging, Dr. Johnson established the Educator Cracker Company and opened a store on Boylston Street in Boston.  The store did well.  As demand increased, the company contracted with Butler’s Bakery of Newburyport, Mass., to manufacture the crackers.  This made sense because Butler’s had been supplying hardtack (also known as pilot’s bread) to sailing ships since the eighteenth century.

In 1895 Nora Bird married a linotype operator from Maine, name of Frederick Barbour.  He soon joined his wife and father-in-law in the business and became its treasurer.  One year later, the company introduced three new cracker varieties: rye, graham and corn meal . . .  not very exciting.  My hunch is that Dr. Johnson resisted expansion, but Nora kept hoping for something bigger.

When Dr. Johnson died in 1898, Nora became president of the company.  I imagine her sweeping into her father’s paneled office, adding a potted palm and a typewriter, and drawing up plans.  She was intuitively smart about product development and distribution.  In short order, the company introduced

The company’s Educator Ark, filled with animal Educator Crackers, sold out every Christmas.

And in 1913, along came the Suffragette Biscuit.

Nora belonged in the twentieth century.  She had a great imagination as well as a strong grasp of marketing at a time when most food manufacturers were just catching on.  Her promotional and advertising campaigns were often cited in trade journals of the day.

In 1919, Nora and Frederick sold their controlling interest in the company.  Thereafter it changed hands and names several times before disappearing in 2001.

That name – Educator Crackers – what a handicap!  Yet Nora Bird Barbour brought her product to every household in America.  That’s why she shines like a beacon through America’s retail past, an unsung daughter of Yankee enterprise.