In the 1890s, Maria’s restaurant on MacDougal Street drew quite a crowd.

Maria herself presided over the kitchen. While she cooked and served, men and women toasted each other, recited poetry, sang, teased, and argued as they milled around large tables.

At Maria’s, a meal of soup and spaghetti, roasted meat, salad, fruit, cheese, coffee, and Chianti could be had for fifty cents.

That’s where Ernest Jarrold – a newspaperman also known as Mickey Finn – often was goaded into singing “Slattery’s Baby.” Like much of Jarrold’s output, the song mocked Irish immigrants:

Oh, I’m sorry to shtate I’m in trouble of late,
From Slattery as well as the childer;
He tries all the while me patience to rile
An’ me poor broken heart to bewilder. . . 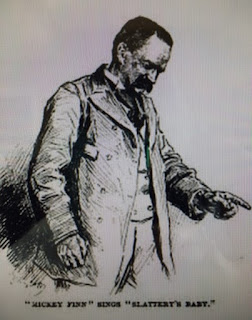 The scene at Maria’s restaurant, dubbed “Bohemian” by social observers and participants alike, rolled merrily along gathering artists and storytellers. Soon enough, it attracted uptown swells who hoped to be fashionably edgy. When Maria’s moved to Fourteenth Street, everyone followed. Intent on preserving their fun and exclusivity, the artists and writers established The Pleiades Club which met weekly at the restaurant.*

After a while, the lawyer and poet William E. S. Fales broke off to start The Blue Pencil Club. He located it in lower Manhattan near Newspaper Row, and invited the bawdy Mickey Finn and other journalists and illustrators to come along.

Among club members, the cartoonist R. F. Outcault was especially well-known. He had made his name with the inimitable character, the Yellow Kid. The bald urchin in an oversized yellow nightshirt emerged from a comic strip about street kids called “Hogan’s Alley,” which Outcault created for Joseph Pulitzer’s New York World. Soon enough, William Randolph Hearst lured Outcault to his New York Journal. It is said that the term “yellow journalism” originated with the circulation battle that ensued between the two papers. **

The irony is that newspapermen like Finn and Fales were a long way from the down-and-out, unconventional style that took its name from the early-nineteenth century vie de Boheme of Paris’ Latin Quarter.

What’s interesting is that the newspaper offices where these men worked were spitting distance from the neighborhoods where Chinese, Italian, and Eastern European immigrants had settled since the 1880s. In this way, they were right on top of the cultural and social changes brought about by new demographics.

One change was the proliferation of ethnic table d’hote restaurants in lower Manhattan. In those days, table d’hote referred to a small restaurant, often in a cellar, where the chef and his family lived, cooked, and served dinner to guests. For these boisterous fellows, a visit to a Hungarian, Spanish, French, German or Romanian joint constituted a Bohemian adventure.

Something new and different, unsullied by crowds hoping to be cool.

Besides, by 1900, a spaghetti dinner could be had at one of many “Italian eating houses,” one writer would recall. 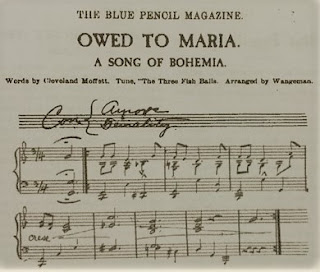 * The Pleiades Club continued into the 1930s.
** Since the cartoonist had not copyrighted “Hogan’s Alley” or its characters, the World was able to continue the strip by employing a different illustrator and retitling it. That illustrator was George B. Luks, who went on to become a member of the Ashcan School of painting. Later, Outcault created Buster Brown, a comic strip character as well as the mascot of the Brown Shoe Company of St Louis. 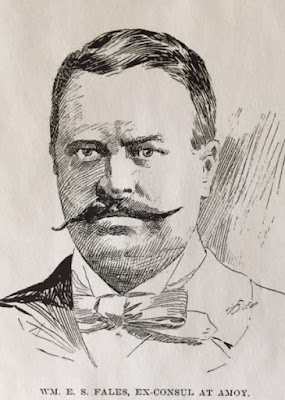 In 1899 when they started the Blue Pencil Club, the men were a bunch of rambunctious, though well-established, writers.

They rented some rooms on Spruce Street in lower Manhattan. Around the corner, the row of buildings that housed the city’s newspapers reached to the sky with a gold dome and towers.

The club was a mess, though:  The floor, when covered at all, was carpeted with sawdust. The ceiling decorations were mostly cobwebs. . .  The furnishings consisted of bare tables, tubs, beer kegs, a telephone and a bar.*

From time to time, police busted the members for lack of a liquor license. But who had the heart to penalize such rollicking consumers of theater, literature, and Chinese culture?

Purveyors of wit that has, 117 years later, lost some of its luster, they joyously took down Tammany Hall, pompous publishers, and business titans.

But it should be noted they were rather smug themselves.

The point of the club was to have a good time, and to publish the Blue Pencil Magazine which they packed with doggerel, drawings, and tales ridiculous and fantastic.

And the names of these men?

They were Billy Burgundy and Mickey Finn (pseudonyms) and Billy Fales.

And there was Forman, the pince nez’d scion of one of Brooklyn’s first families who got his start when the legendary Irish editor of the Brooklyn Daily Eagle, Thomas Kinsella, sent the lad to San Francisco in 1877 to cover an anti-immigrant uprising fomented by a labor leader named Denis Kearney.

Forman ended up reporting on the Sand Lot riot, a three-night rampage during which four Chinese men were killed. He went on to write about theater, manners and the like. For 25 years, he edited The Journalist, the nation’s first magazine for writers and editors.

His essay, “How to Eat an Orange,” which appeared in Northwest Magazine in 1890, was well-received as they used to say.

As for Billy Burgundy!  Why would anyone named Oliver Victor Limerick need a pen name?

A Mississippi native who trained to be an allopath, Limerick was an incorrigible joker. He came to New York to edit a medical journal. After a while, he decided that he would rather write stories than practice medicine.

Percival was the confidential valve in the Borated Talcum Powder Trust, and drew down a voluptuous salary for his services in behalf of the Chafe-Allaying Industry. . .

Then there was Mickey Finn, a.k.a. Ernest Jarrold, an Englishman who had been hanging around Newspaper Row for years, contributing short stories to The New York Evening Sun, Harper’s Weekly and other magazines. He often poked at Irish immigrants.

And there was Billy Fales – of whom his friends wrote:

Brave, brilliant Billy! No man or woman ever heard from his lips of the great grief that paralyzed his ambition and made a wreck of his career, for there was no yesterday on his calendar,

He often said that life was a joke and he generally appeared to make this epigram the maxim of his career.

Chow Chop Suey at Mong Sing Wah in Chinatown, the spaghetti at Maria Da Prato’s on MacDougal Street, the oyster stalls at Fulton Market, and the Lomo de Puerco con Platanos at Braguglia & Carreno on Broadway; Billy loved it all.

He steered the members of the Blue Pencil Club through the night, returning at dawn to his home on Pineapple Street in Brooklyn Heights.

They called him, as many had been called before, “The King of Bohemia.” 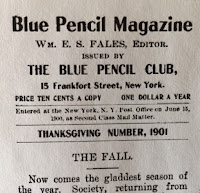 On a beautiful fall day in 1890, the newly appointed emissaries William E. S. Fales and Edward Bedloe went off to China on the S. S. New York.

I imagine them on deck, waving goodbye to no one because neither man had, at the moment, anyone special in his life.

Between them, Bedloe actually possessed qualifications, having served in the American Consular Service in Italy and Egypt. Fales’ fluency in Chinese would be an asset, as well. Both men were fascinated by Chinese culture: Bedloe with etiquette and weaponry; Fales with decorative art and food.

Messrs. Bedloe and Fales were heading to Xiamen, which Westerners called Amoy, a port city about 300 miles northeast of Hong Kong, along the Taiwan Strait.

They would arrive at a country stuck in time, except for a dramatic escalation of foreign intrusion.

The Qing Dynasty, dating to 1644, continued its rule in the person of the Empress Dowager Cixi who had seized power in 1865. First she stood in for her son, Tongzhi, who died young of smallpox or venereal disease or both; then for Guangxu, her sickly nephew who advocated national modernization. (She had him poisoned.)

During the Empress Dowager’s regency, the United Kingdom and increasingly the United States, Russia, and Japan expanded their control through treaty ports.

Treaty ports originally were established by the British after they defeated China in the First Opium War. The treaties governed trade on terms never favorable to China. They also created districts within each port city, inhabited exclusively by foreigners who answered to no one. Fales and Bedloe resided in such a neighborhood.

Since Amoy was a treaty port, the men focused on American trade interests. They were pleased to find that Far East markets enthusiastically sought anything that came from the U.S.

But there was a problem with fraud:

The Consul kept a special eye on arms and ammunition:

One example [of fraud] was an imitation Winchester rifle made in Belgium by an English firm of the lowest grade materials, which was liable to kill the man who fired it as the man or animal it was fired at.

What else demanded the attention of Bedloe and Fales?

rituals of death and burial.

Like most Westerners, Fales and Bedloe were fascinated by the hillsides of Amoy. Across the centuries, the slopes had become packed with tombs. In some parts of the walled city, there were no boundaries between burial grounds and private property.

“Amoy proper and its suburbs have a living population of about one million, and a dead one of four and a half times as many,” Bedloe informed the U. S. Government.

In the Journal of the American Medical Association he affirmed Amoy’s “reputation as the dirtiest city on the face of the globe,” describing open cesspools and impassable roads.

Despite the dirt, China intrigued and delighted the men.

Both were well-educated, sharp observers, and fine writers. They supplemented their annual salaries (Bedloe: $1,490; Fales: $354.19) by writing for various U. S. newspapers and magazines.

In an 1891 letter to the editor of Lippincott’s Magazine, Bedloe wrote:

You have no idea, my dear Stoddart, what an inexhaustible supply of literary material this ancient civilization possesses . . . my daily life here is one mass of surprises and arrangements. They do everything that we do, but in exactly the opposite way.
After several examples involving concubines, burglars, and animals, Bedloe closed:

Now I have two pretty poems from the facile pen of my wicked Vice which I will bring on to you in January or February. You shall have the first bid on them. They are truly great and I hope you can afford to buy them.

It appears that editor Stoddart, who had previously published poems by Fales, decided to pass.

Fales’ stories fared better: “Chinese Armor,” “”Chinese Statuary and Figures,” “Driving out an Evil Spirit,” “Fortune Telling in China,” “The Pharmacist in the Far East,” “Chinese Little Devils,” and others appeared in American papers between 1891 and 1894.

In 1893 Fales took leave and returned to the United States, where he married a pioneering journalist and suffragist, Margherita Arlina Hamm. Together they returned to Amoy and traveled to the Philippines and elsewhere.*

By mid-September, W. E. S. and Margherita had returned to Brooklyn. Fales reestablished himself in law and journalism and resumed his love affair with Chinatown while Hamm wrote books and lectured.

The New York Press Club – a rowdy bunch – welcomed back William with a dinner featuring Punch a la Chinois.

*Hamm claimed that she and Fales were in Korea when the Sino-Japanese War began August 1, 1894. She reported that she had witnessed attacks on the palace in Seoul and an assassination attempt on Queen Min of Korea. However, Fales and Hamm were back in the U. S. by September 22, 1894 . . . and sailing time would have been at least 80 days.