Superintendent Holmes was an intimidating man.  He could appear kindly when he spoke to a circle of children who gathered around him.  However, he preferred to be stern, his gray eyes blinking behind thick spectacles.

“Come back when you have real experience,” he would tell new graduates of Teachers College when they came knocking on his door.  One applicant recalled a monolithic desk and booming voice.  She scurried away to teach in New Jersey.  Several years later, Holmes hired her.

In 1913, when Dr. Holmes became superintendent of schools in Mt. Vernon, N.Y., he arrived with a newly minted doctorate from Clark University.  He proudly carried his dissertation, The Individual Child, in his back pocket (figuratively speaking).  He had studied under G. Stanley Hall, a pioneer in the field of developmental psychology whose research on adolescence inspired education reform in the U. S.

Hall had worked at the University of Leipzig with Wilhelm Wundt, a philosopher and physiologist whose experiments in the social aspects of human thought and behavior launched the field of psychology in 1879.

To say that Hall and Wundt were eminent falls far short of the mark.  More than a century later, all of their ideas have been disputed but their work remains influential.

Given these prestigious connections, the Mt. Vernon board of education considered itself fortunate to have landed Holmes, and he immodestly agreed.  But the new superintendent would face twentieth-century challenges for which his mentor had not prepared him.

Enrollment in the four-square mile city – which had incorporated two decades earlier – was rising rapidly, as was the case in all of the nation’s cities.  Most residents called for more schools but some old-timers did not.  Opposition to high schools had been common during the nineteenth century; those feelings persisted here even as the Mt. Vernon school board commissioned plans to build a new one.

Further, although Mt. Vernon was technically a suburb, its demographics were more urban than suburban.  Founded and controlled by Protestants, the city had been home to Irish and German immigrants during the 1870s.  Along came enough Jews to support two synagogues.  A small black community, established after the Civil War, grew slowly on the South Side of the city.

Certainly a far cry from the hamlets of Grafton and Upton, Mass., where Holmes had served previously as superintendent.

Finally, there were Italian immigrants, part of the late-nineteenth century wave of European immigration.  They were most detested and exploited by the city’s establishment.  The men found jobs as stone masons, digging the cut for the New York Central Railroad which would bisect the city of Mt. Vernon, much to its detriment later on.

Italian artisans also created beautiful stone and tile work for the homes of wealthy suburbanites.  And when they got on their feet sufficiently to form their own construction companies, Italian-American contractors always held the winning bids to build new schools.  Among these was Mt. Vernon’s gleaming new academic high school, completed in 1914.

However, when it came time for the children of Italian immigrants to go to high school, most were consigned to Edison Vocational & Technical High School, not the aforementioned college preparatory school.  Black students also were directed to Edison.

It was an excellent place to learn a trade but the students were robbed of liberal arts degrees.

Life would change for Mt. Vernon’s Italian immigrants, however.  Over the course of a generation, the community gained seats on the school board and eventually came to dominate city government.

Unsurprisingly, the black community remained powerless.  Before the Great Migration, about 1,000 black students attended the public schools.  Yet “the Negro situation” was pronounced enough to draw the attention of the State Commissioner of Education.

The commissioner and several state senators saw that Holmes had taken his cue from the board of education, which sanctioned inferior facilities in black neighborhoods.  And they wondered why black teachers were employed only in classes where white students constituted a very small minority.

“Many white persons would move from the neighborhood of any Mount Vernon school in which a Negro teacher had a position, and realty values would depreciate,” Dr. Holmes told a state legislative hearing, according to the New York Times.

“There was a storm of protest from parents when we once assigned a Negro substitute teacher,” said the school board president.

Mt. Vernon never integrated its elementary schools, so how could one have reasonably expected a measure of equity during the twenties and thirties?

And yet, turning back to Superintendent Holmes, undeniably he gave his best to the schools over which he presided for 27 years.  Nearing retirement in 1940, he decided to write a history of the district.  It’s packed with photographs, charts, and self-adulation.

Here are some of the things he accomplished, in line with progressive education initiatives of the time:

Separated the 7th and 8th grades from elementary school to form what he called the “central grammar school,” a forerunner of the junior high school,

Introduced the “platoon system,” invented in 1907 by the enterprising superintendent of the Gary, Indiana schools.  Instead of staying in one classroom with one teacher all day long, students moved around for science, art, music, and physical education,

Established a medical department to check the ears, eyes, chests, and teeth of poor children, 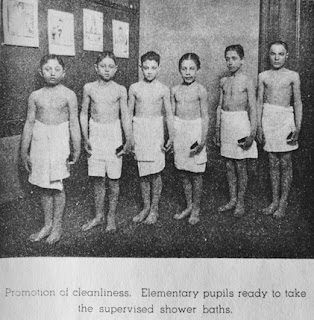 Under Holmes, the Mt. Vernon schools gained a fine reputation.  But the superintendent’s heart really lay back in the nineteenth century.  After he retired and returned to his native Maine, he became fixated on a rundown Victorian mansion in Portland.  He and his sister, Clara, bought it and started to restore it.  He died not long after, in 1948.

Today the Victoria Mansion is a flourishing tourist attraction and the Mt. Vernon public schools have seen far better days. 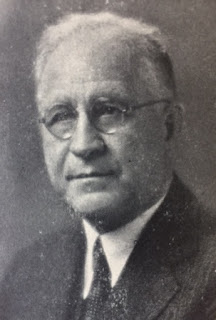 That spring I was crazy about a guy who was the director of the campus radio station.  He came from Wisconsin and always wore jeans and Frye boots.  He was a swashbuckler, and he bedazzled me.

It always took longer for spring to arrive in Chicago.  Even in May, one might find a little patch of snow lurking deep under a hedge.

Now here came Easter weekend, with an invitation to visit my guy in the small town where his father, mother, and sister lived.

The eighties were not even on the horizon, so most college girls dressed in ways that were. . . unattractive. I decided to swap my battered jeans for a new, flowery skirt.

The skirt would be paired with brown clogs so that I would be sure to look my very best.  Did I really not own a nice pair of shoes?

Was anyone ever so young?  asked Joan Didion in her essay, “Goodbye to All That.”

I am here to tell you that someone was.

Off to Wisconsin, where for the first time I saw a mother truly fawn over her son.  Anything he wanted – including trimming the sunny-side-up eggs so that the perfect yolks were surrounded by perfect circles of white.

I remember thinking: I can’t top that.  And, do I want to?

For the bloom already was off the rose.

In the guest room to which I’d been assigned, sitting on a bedspread that matched my skirt, I opened the drawer of the night table and found it packed with love letters from my boyfriend’s high school girlfriend, desperately begging him to take her back.

How awful to behold.  It was necessary to scan just two or three of the letters to realize that I was going to be axed, because that’s how he operated.  I felt badly for the ex-girlfriend, and wondered why the letters were in this particular drawer rather in than his room.  And also: why keep them at all?

Sure enough, he did break it off a few weeks after the Easter visit.  I should have ended it first, but just like his ex-girlfriend, I had been swashbuckled.

The school year came to a close and I headed to Waltham, Mass., where my brother attended college.  That summer, he had rented a room in an old house. Another room became available so I took it without even having a job.

Happily, it turned out that the Brandeis University music department required someone to handle the phones and type letters and reports.  The instrument I played was the IBM Selectric, still the most wonderful typewriter that ever lived, at 90 words per minute.

The department chair paid me the ultimate compliment when he said that I typed the way he imagined Beethoven had played the piano.

Also living in the house were a woman who would become an eminent professor of American literature and a Soviet Jewish immigrant, astounded by American appliances, who would start college in the fall.

The house where we lived faced back onto Nipper Maher Park, which had a baseball field where a team of youngsters called the Little Nippers played at night. We’d sit on the bleachers and watch.

A terrible heatwave smothered the East Coast for more than two weeks.  I read more books faster than ever before – David Copperfield and The Woman in White and at least 20 more. That may not sound like a scintillating summer, but it renewed me.

Much later, my kids loved to hear about the perfect eggs.