The boy took off just after the school year ended, leaving a prim village in the New York City suburbs and heading west.  It was 1925, the crash was four years off, and in his pocket was the not insignificant sum of $40.

Kenneth left a note of explanation for his parents.  He had been up to some mischief, trespassing at the pool of a wealthy neighbor, and he didn’t want to face the humiliation of apology and punishment.  Please leave me alone, he added.

Kenneth’s father, advertising manager for the American Tobacco Company, offered a $5,000 reward.  His mother was said to be prostrated and in serious condition.

Just outside Pittsburgh, an executive with the Hillman Coal and Coke Company picked up the 15-year old hitchhiker, bought him dinner at the local YMCA, and dropped him at the Salvation Army Home nearby.  Later he realized that the boy was Kenneth Penrod, the object of a nationwide search.  The following day, he wrote matter-of-factly to the father on Hillman company letterhead:

“Thursday your son was to leave for Columbus, and on to Chicago.  I did not get the impression that he had informed his parents of the proposed trip.  However, I am sure that you need not worry, as he is able to take of himself and was in good spirits.”

As Kenneth continued his journey, he spent a few days working on a farm in Ohio.  “Yes I can do farm work, chores, and I know how to take care of horses, harrow corn, and do other things about a place.  I got up at sunrise and quit work at dark.  I was to get $3.50 a day,” he would tell a reporter, triumphantly.

Kenneth had hoped to stick to the Lincoln Highway from Philly to Pittsburgh to Chicago and onward.  But he strayed to the small city of Kenton, Ohio, where he got a lift from a truck driver named Carter, who recognized the boy from a newspaper photo and took him to the police in Cleveland, three hours away.  The next night, Kenneth’s father arrived by train to bring his son back to New York.

There, much would be hashed out.

When Kenneth was born in Omaha in 1909, his parents had been married a scant year and his father had already launched a career in advertising.  This profession was a very good choice.  As mass culture developed, radio, cars, film, music, and fashion – not to mention the Book-of-the-Month Club – drove modern entertainment and consumption.

In Omaha, the father made his name working for the Outdoor Advertising Association of America, where he helped create the market for roadside billboards.  Then he jumped to the tobacco industry, which took the family away from his wife’s Nebraska clan, first to Chicago and then New York.  By that time a daughter, Helen, had come along.  She was six and Kenneth was nine when they arrived in the affluent one square-mile village located a half-hour from Grand Central Terminal.

But Kenneth became deeply unhappy.  He remembered halcyon days in Omaha with aunts, uncles, and cousins all around.  He missed the easy Nebraska summers spent at the family’s country estate at Papillion, a small city with unpaved streets whose name derived from the French word for butterfly, papillon.  French fur traders were among its early settlers. Through it ran the Papio Creek, a tributary of the Missouri River; full of fish and prone to flood.

Unsurprisingly, after the swimming pool incident, Kenneth made his plan to go to Nebraska.

But now he found himself in New York again, negotiating with his parents.  Finally, the father agreed to let Kenneth and Helen visit his wife’s family for a few weeks.  But something would have to be done about Kenneth’s schooling, he warned, for it seemed that more problems would ensue.

In Papillion, Warner smiled for a local photographer and sat for a newspaper interview.  “It’s great to be out here again – it’s just like coming home,” he said.  “I may even go to high school here in the fall.”

“When a fellow feels like that about a place, you can hardly blame him for making a run for it – now can you?” the reporter wrote.  He noted Kenneth’s blond hair and athletic ability.

Meanwhile, Kenneth’s father made plans for him to attend a boys’ boarding school in New Jersey.  In late August he drove Kenneth to Blairstown.  They talked with the headmaster and walked around the grounds.  After a few hours the father said goodbye to his son.

One month later, Kenneth developed acute gangrenous appendicitis.  The local surgeon operated on him but he died five days later.

Part of this sad tale took place in a house where we once lived.  I keep wondering which room was Kenneth’s; where he stared out the window toward Nebraska. 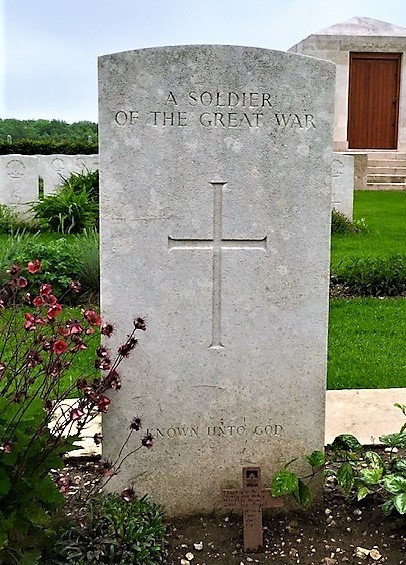 We took these photographs on a cold rainy day at the Somme Battlefields, in June 2016.


That year marked the centennial of the Battle of the Somme, which actually comprised a series of bloody trench-warfare battles between the British and French armies, and the armies of the German Empire.

Across nearly five months, three million soldiers fought and more than one million were killed or wounded.  On the first day of the battle, the British suffered 57,470 casualties, of which 19,240 were fatalities.  Most historians agree that neither side won.

As is the case in many World War I cemeteries, more than one thousand of the headstones bear the inscription, A Soldier of the Great War, Known Unto God.

Every war is ironic because every war is worse than expected.  Every war constitutes an irony of situation because its means are so melodramatically disproportionate to its presumed ends.* 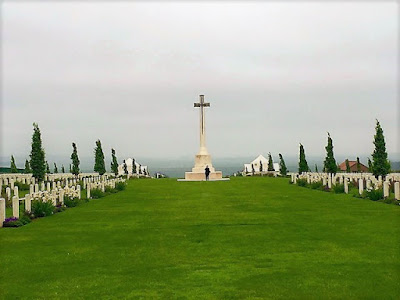