In 1928, about 300,000 black people resided in New York City and 250 of them were employees of the department store known as Wanamaker’s.

Founded by John Wanamaker in Philadelphia in 1876, the same year as the nation’s centennial, the store employed African-Americans through Reconstruction and into the Jim Crow era.  Wanamaker’s devout Christianity led him to believe in racial equality – to the extent that the times permitted.

The brilliant entrepreneur was also influenced by his friend Robert Curtis Ogden, who joined Wanamaker’s soon after it opened and conceived of the store’s innovative advertising and marketing schemes.

Robert C. Ogden had been committed to the education of black Americans since 1874, when he joined the board of the Hampton Institute.  The Institute, established after the Civil War as a teachers’ training school, provided agricultural and industrial education – although little in the way of academics – to freed slaves. *

In 1896, Ogden moved from Philadelphia to New York City to manage a new branch of Wanamaker’s located downtown near Astor Place.

There he drew admiration from black employees who soon formed the Robert Curtis Ogden Association of the John Wanamaker Store.  Its purpose was to celebrate the achievements of the store’s black employees; for example, the association awarded annual prizes for achievement in musical composition and performance.

In 1905 Wanamaker and Ogden addressed the National Negro Business League, founded by the educator Booker T. Washington to support black-owned businesses.  Their remarks received flattering reviews in the New York Age, one of the nation’s foremost African-American newspapers.

But contemporary scholars note that the speeches were patronizing and that both men denied the existence of systematic racism.  Further, it is now evident that Wanamaker’s nonwhite employees were rarely promoted. They remained in menial jobs behind the scenes with the exception of elevator operators.

However, the store’s employment practices were tolerant compared to other businesses.

After World War I, for example, white veterans lobbied the Fifth Avenue department stores to fire black elevator operators and give them the jobs instead.  Saks and Best & Co. obliged but Wanamaker’s and Bloomingdale’s did not buckle.

One could argue that Wanamaker and Ogden were racists, yet they rose above the shameful standards of the day.

John Wanamaker died in 1922, by which time his son Rodman had complete control of the company.  While Rodman’s three passions were music, aviation, and American Indian culture, he continued the work of the Ogden Association and the store’s relatively liberal hiring policy.

Everything changed when Rodman Wanamaker died in March 1928 and a glad-hander named Grover Whalen, a longtime store employee who had been one of Rodman’s assistants, stepped into the top position.

Perpetually doffing a homburg hat, Whalen dabbled in everything: politics, public relations, ceremonies.  He did have some good ideas such as the creation of WNYC, the city’s radio station.  Also, he was a fabulous greeter of General Pershing, Charles A. Lindbergh, and numerous famous people who visited New York.

But he wasn’t great for Wanamaker’s.  Just a few months after Whalen stepped in, the New York Age ran a front-page story about a change in the store's longstanding policy.

It turned out that a white woman customer had observed employees eating together in the integrated company cafeteria and complained to management.  Whalen immediately issued an order to segregate the lunchroom.  In protest, black employees began eating in local restaurants rather than in the cafeteria, but Whalen remained unbowed. 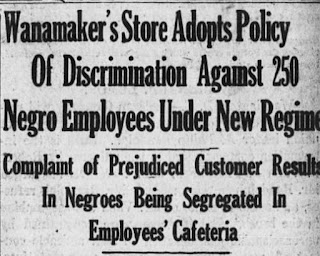 Fortunately, or unfortunately, Grover Whalen could not resist the call of City Hall.  Within a few months he was gone from Wanamaker’s, having accepted the job of Police Commissioner offered to him by playboy Mayor Jimmy Walker.

“There is plenty of law at the end of a nightstick,” declared Whalen.  Communists and bootleggers counted among his many targets.

Over time, Whalen’s views on race might have evolved.  But they did not.

In his autobiography, Adam Clayton Powell, Jr., the first black member of the U.S. House of Representatives, recalled visiting Whalen around 1935 just after the former police commissioner had been named chair of the New York World’s Fair Corporation.  The fair would open in 1939.

We went to ask him for employment for qualified Negro people.  He offered us token jobs.  We refused them.  The slogan of the fair was “Building the World of Tomorrow,” and I can remember telling Grover Whalen: “You cannot have a World of Tomorrow from which you have excluded colored people.”

Mr. Whalen, suave and urbane, smiled beneath his carefully trimmed mustache and said, “I do not see why the world of today or tomorrow of necessity has to have colored people playing an important role.”

“A loss shared by all New Yorkers,” came the cry when Whalen died in 1962.  Even though the language is boilerplate, it’s still hard to choke down.