A few weeks ago I read a crushing article, “The Lost Children of Tuam,” in the New York Times.

The story concerns hundreds of unmarried Irish Catholic mothers who, during the mid-twentieth century, were exiled to the St. Mary’s Mother and Baby Home in County Galway. Inside the stone fortress, as one survivor described the home, the nuns subjected the mothers and their children to neglect and degradation.

Then, after a year of abuse, the mothers were forced out into the world leaving their children behind.  Many of those children eventually died and were buried under gruesome circumstances, although some made it through.

When the neighborhood kids encountered the St. Mary’s children at the local school, they taunted them and called them “home babies.”

Although the circumstances are vastly different, the story reminded me of the Wartburg Orphanage in the city where I grew up, and how the students who lived there were known as the “Wartburg kids.”  That’s what we called them.  The teachers said it, too.  If pressed, a child might state in a very low voice, “I live at the Wartburg.”

We never visited the Wartburg.  Therefore, we didn’t know anything about what life was like there.  No one enlightened us, either, which made it even easier to imagine something unpleasant.

There was an impassable line between the students who lived at the Wartburg and everyone else who attended our predominantly white elementary school.  Our city had a very strict social order most evident in the railroad cut that separated the South Side – largely black – and the North Side – largely white.  The Wartburg fit into that hierarchy.

The founder of the orphanage, Rev. William Passavant, called it the Wartburg Orphan’s Farm School.  He started it after the Civil War for the children of dead soldiers.  For a while, elderly people lived there, too.  The reverend went on to establish several other orphan’s homes and spread the word of evangelical Lutheranism.

He named the school after the medieval Wartburg Castle, located on a mountaintop in Thuringia in central Germany.

Passavant asked a businessman named Peter Moller to purchase 121 acres in Mount Vernon, N.Y., and to provide an endowment.  Moller, who liked to refer to himself as a Hanoverian immigrant (as opposed to German), was the eldest of several brothers who went into the sugar refining business in the 1850s.  He made his fortune as president of the American Sugar Refining Company.  Eventually he got embroiled in price-fixing but that was long after he gave Passavant the money.

To head the Wartburg, Passavant called on George Charles Holls, a German immigrant who had risen quickly in the ministry after he founded the first Lutheran orphan asylum in the U. S., in a Pennsylvania town that bore the inimitable name, Zelienople.

After Holls retired in 1889, along came Gottlieb Cleopas Berkemeier, who presided over the Wartburg until his death in 1924. During World War I, Berkemeier became active in Friends of Peace, a pro-German group that lobbied against American involvement in the war, especially the prospect of a military alliance between the U.S. and the U.K. 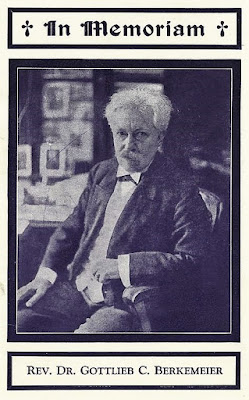 The first American orphanages sprang up during the early 1800s in response to industrialization, which robbed children of their parents’ care.  Some orphanages were created to wrest control of children from their parents; this occurred especially among the families of Irish immigrants.

Orphanages proliferated in the U. S. during the last third of the nineteenth century.  Some historians believe this reflected society’s deepening concern for the welfare of the needy, young and old.  All institutions were privately funded, and religious and ethnic groups looked out for their own.

My great-grandmother, for example, lost her husband soon after emigrating from Russia to the U. S. with two young children.  She placed them in a Hebrew Asylum for one year until she got back on her feet.

There were a few orphanages for African-American children.  The Colored Orphan Asylum in New York City operated between 1836 and 1946. By and large, however, black children without parents were sent to jail or reform school.

As progressivism surged into the twentieth century, Americans became disenchanted with orphanages, which were thought to keep children dependent and in lock-step (not to mention concerns about abuse).  In 1909, President Theodore Roosevelt convened a White House conference to address the care of dependent children.  Subsequently, the Federal Government created the Children’s Bureau, which had considerable latitude in overseeing foster homes, institutions, and medical care.

In 1911, Illinois became the first state to authorize mother’s pensions for families without male breadwinners.  It was thought that the pensions would minimize the need for orphanages.  By 1919, 39 states had followed suit.  Eventually the program was folded into the New Deal, along with much of the work of the Children’s Bureau.

Through two world wars and the Depression, orphanages were filled to capacity.  During those years, the Wartburg drew widespread praise as a model institution.

In 1964, its board decided that the children should attend the local public schools.  I’m certain that at least a few public school parents and administrators objected. After all, these were “Wartburg kids.”