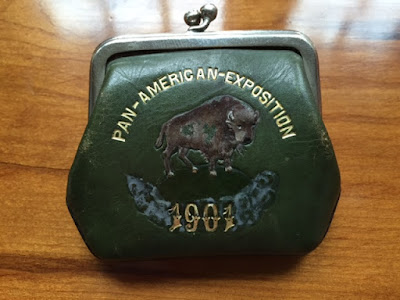 In 1901, the year my husband’s grandmother was born, someone brought the baby girl a green leather change purse from the Pan-American Exposition in Buffalo, N.Y.

Throughout the nineteenth century, Atlanta, New Orleans, New York, and other U.S. cities hosted fairs that displayed important examples of industrial invention. The most soaring of these were the 1876 Centennial Exposition in Philadelphia and Chicago’s 1893 World Columbian Exposition. It is impossible to do them justice in a few paragraphs. Many books and articles attest to their grandeur as well as the racism and sexism that pervaded fair politics and exhibitions.

Just past the turn of the twentieth century, here came Buffalo with its dazzling illumination of the fair’s elaborate white buildings: behold the future of hydro-electric engineering generated by the power plants of Niagara Falls. However, the thing that Americans remembered most about the fair, at least for a generation, was the assassination of President William McKinley as he stood shaking hands with visitors outside the Temple of Music.

President McKinley is not often cited. But in his last speech, soon before the assassin stepped forward with a gun swaddled in a handkerchief, he delivered a quotable quote: “Expositions are the timekeepers of progress.” That dusty remark seems worth noting.

It hearkens back to the years when most Americans had to travel somewhere in order to see big advances in technology, medicine, communications, and the like. Since then, for a very long time, innovation has come right to our door or perhaps during a visit to the Apple Store. A public exposition where people go to find out about new things -- obsolete.

So what is today’s equivalent of a timekeeper? I’ll venture that it could be something small that looks back instead of forward. Perhaps it’s not about the future; it’s of the past. For me, the Buffalo change purse, once a child’s souvenir, is keeping time well beyond its century.