At its peak in the early 19th century, the Jewish community of Kleinsteinach-Riedbach in Lower Franconia, Bavaria, numbered about 200. There was a school, synagogue, and cemetery. Today the cemetery remains and the town is quite charming, as if nothing evil happened there in November 1938.

Seligman Schloss, born in Kleinsteinach in 1830, immigrated to the United States in 1853. He settled in Detroit and became a highly successful manufacturer of men’s suits; so much so that when he died in 1914 he left an estate worth more than $1 million.

His talents, which I have ever failed to appreciate, do not run along commercial lines, and it is on that regard that I have made the best effort within my power to provide permanently for him. . .

Murray was furious. He called the terms “repulsive,” and vowed to challenge the will. Murray must have been successful, for he left a considerable estate when he died in 1927 at age 51.

Why did the son infuriate his father? Was Seligman angry because Murray refused to participate wholeheartedly in the family business? Did he object to Murray’s passion for revolution? Or his rejection of Judaism in favor of John Alexander Dowie, a healer who claimed to be a prophet and established Zion City, Illinois?

Good feelings surely prevailed at some point, for Murray was the only Schloss child who accompanied Seligman and his wife, Hannah, to Europe in 1895. Unlike his brothers, who joined the firm of Schloss Brothers, Murray graduated from college. First enrolled at the University of Michigan, Murray transferred to the University of Chicago and graduated in 1904.

At Chicago, Murray attended classes taught by the compelling Professor Oscar Lovell Triggs and in 1905 joined the staff of Triggs’ magazine, To-Morrow, as managing editor. For a while, Murray wrote a column entitled “To-Morrow’s Today and Yesterday,” in which he railed against capitalism and politicians:

Revolution is in the air. In politics only can we count the tallies; but no interest that we humans have escapes the metamorphosis that the changing world is undergoing. The forms that fetter, whether legal or social, that labor-saving humanity has outgrown but not sloughed off, must go, and only by new ways of living and thinking can we attain peace and the new life.

The high-flown rhetoric echoes the style of numerous socialist publications that came and went in the U.S. between 1900 and 1920. The Russian Revolution fired up many a writer about the promise of the future.

So it seems incongruous that during this time, Murray took over a floundering Chicago magazine called Wayside Tales which featured detective stories and photographs of theater stars. He and his business partner, Marguerite Warren Springer, widow of a real estate mogul, advertised “Tales of Work Play Life in All Moods, A Flavor of its Own.”

Next, he rented an office in the Times Building in Manhattan and proposed to move Wayside Tales to New York. “Can it be possible that Chicago will not stand for the erstwhile slumbering magazine any longer?” commented one wit.

Well, maybe – because now Schloss is living at the National Arts Club on Gramercy Park, N.Y.!

And now Schloss is running for Congress on the Socialist ticket in the Third District of New Jersey!

“Nobody knows exactly what he does,” commented the editor of The East Side, a society rag, about Murray in 1910.

“He is a genial university man with a passion for the new civilization,” observed another journalist.

Then, Murray had the honor of being insulted by H.L. Mencken, sarcastic columnist for The Baltimore Sun.

“Schloss is an amateur socialist and culture-hound deluxe,” Mencken wrote to his friend George Jean Nathan, a critic with whom he would found the enormously popular magazine, The American Mercury.

“The conversation ran to poetry,” Mencken continued. “After my tenth seidel* I delivered my well-known dithyrambic** glorification of Swinburne+ right in the face of Schloss.”

In 1916, Murray Schloss moved out to Los Angeles. The census shows his occupation as a social worker. During the next seven years, he bought up 2,500 acres in the Inland Empire region of California, planning to create a Utopian community in an area called “Heart of the Hills.” It was said that Murray claimed to hear voices from the “Masters” who told him to build a “Temple of the Dawn.”

After he died in 1927, there followed years of legal wrangling over the property before it went into a state trust and was given to San Diego State University in 1960. The land is now part of the Santa Margarita Ecological Reserve near the ancient Indian city of Temecula. It serves as a field station and helps to protect the Santa Margarita River and its ecosystem.

Murray Schloss gave a great gift to the environment. But his disappointed millionaire father, who fled European pogroms, surely would have raised his arms and voice to say: “Utopia? Temple of the Dawn? This is how you spent my fortune?” 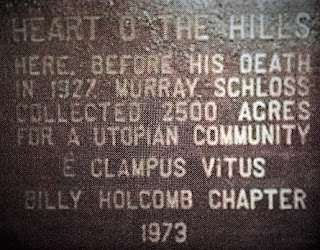 *A large glass of beer.
**Spoken with fervor.
+Algernon Charles Swinburne, a Victorian poet whose florid ballads Schloss would have despised. Mencken himself was ambivalent about Swinburne.