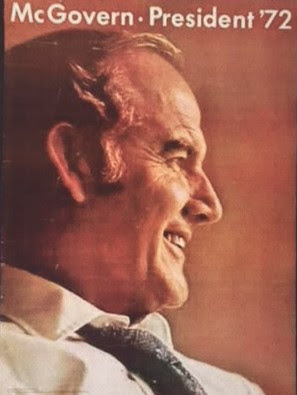 As the dutiful daughter of liberal Democrats, it behooved me to work on the McGovern campaign during the summer of 1972. McGovern ran on an anti-war platform against President Nixon’s well-oiled Committee to Re-elect the President (derisively known as CREEP).

Of course, it turned out that the Watergate burglars were not so well-oiled. But that story gained traction only after the election, which McGovern lost in one of the largest landslides in American history.

The Democratic candidate didn’t get off to a good start. While the 1972 party convention lacked the violent clashes between protesters and the police which marked the 1968 Chicago convention, the four days at the Miami Beach Convention Center generated plenty of turmoil.

Following 1968, the party revised longstanding formulas for choosing delegates in order to ensure greater representation of women, young people, and minorities. These changes boosted the importance of state primaries and loosened local pols’ control over the choice of delegates. The new rules were complicated and old-timers challenged the credentials of more than 80 of the delegates.

Notwithstanding, the faces in the convention hall certainly looked like a new crowd.

The 1972 party platform, entitled “For the People,” was the most liberal of its time. It proposed ending the Vietnam War immediately in exchange for POWs. It called for reduced defense spending, amnesty for draft evaders, a crackdown on illegal handguns, equal opportunity, racial integration, and abolishing the death penalty. Reproductive rights were alluded to with a carefully worded affirmation of the right to privacy and freedom of choice. A gay rights plank, eloquently presented by California delegate Jim Foster, was considered and rejected (although McGovern supported it).

Feminists split over whether there was a greater imperative to nominate a “winner” or a woman. Betty Friedan endorsed McGovern’s nomination but Gloria Steinem’s contingent supported the black Congresswoman Shirley Chisholm, who had received 430,000 primary votes.

Finally, on the last night of the convention, a contentious vice-presidential roll call pushed back McGovern’s acceptance speech to 3 in the morning.

Needless to say, there was no “convention bounce.”

A few days later, I took the bus from Mt. Vernon up to White Plains, where McGovern’s Westchester County headquarters were located right on Main Street.

Inside, a few volunteers wandered around while a college student set things up. There would be a table outside with buttons and pamphlets about McGovern and his vice-presidential pick, Senator Thomas Eagleton of Missouri. We would focus, our leader said, on winning over the lunchtime crowd.

He was serious, but now that line really makes me smile.

We also stuffed envelopes and made phone calls, working from old-fashioned typed voter registration lists. I think there were push-button telephones by that time. . .

And so things went along until journalists learned that Eagleton had been hospitalized for depression and anxiety three times and underwent electric shock therapy during the 1960s.

On July 31, after a week of supporting his pick “1000%,” McGovern asked Eagleton to withdraw from the ticket and chose Sargent Shriver, President Kennedy’s brother-in-law and first director of the Peace Corps, to replace him.

The day after, people flocked to our table on Main Street. Everyone wanted McGovern-Eagleton stuff.

Now we needed to redouble our efforts. So we bore down through the rest of the summer; corralling voters here and there, squinting into the noonday sun. 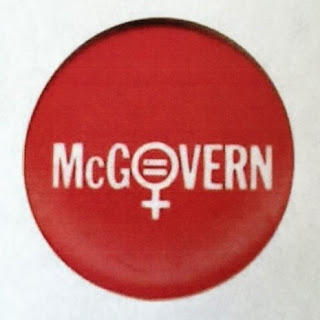