A Dress Shop in Chicago

Mme. Marguerite always said that she arrived in Chicago as an understudy to the French actress Sarah Bernhardt. When the theater company returned to Europe, Marguerite decided to part ways with the Divine Sarah.

It was 1910. She stayed in Chicago and became a modiste – that’s a word you don’t hear anymore. It means a designer and purveyor of fashionable women’s clothing. Between 1912 and 1948, Mme. Marguerite reigned over the wardrobes of the city’s wealthiest women.

Her first shop, House of Marguerite, opened on North Michigan Avenue to the delight of Mrs. Armour, Mrs. McCormick and other ladies who wanted custom-made gowns.

Their husbands and fathers were industrialists, bankers, entrepreneurs; perhaps the heirs to great fortunes. But when it came to fashion, Marguerite was the authority:

“I’m pleased to say, not a chi chi dress in sight!”

“There was white satin at all of the important French collections last spring.”


Except during wartime, Mme. Marguerite traveled to Europe twice yearly to see the shows in Paris. She became very successful. By the early twenties, she had three shops, three cars, a chauffeur, and a country home in Michigan.

Around that time, Marguerite married for the first time. Henri Farre also was French, although it’s not clear whether they met in France or Chicago.

A painter and aviator, he had held an unusual position during World War I. Just after Farre enlisted, the Governor of Les Invalides (also director of the Army Museum) asked him to serve as a military artist.* 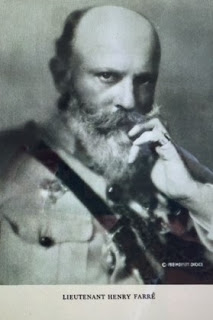 Farre would “paint certain phases of action, so as to immortalize on canvas true pictures of fighting in the field,” the governor told him.

When Farre explained that he was an aviator as well as a painter, the governor said:

Eh bien, c’est parfait; I had not thought of the fifth weapon. Would you like to be a painter of aviation?

And so Farre flew through the war, capturing the shattered landscapes and bursting bombs in pencil and paint. He watched and sketched over Metz, Verdun, Zeebrugge, the Somme, and the North Sea. He also painted many officers’ portraits.

In 1918, Henri toured the United States with a collection of his war paintings entitled “Sky Fighters of France.” The Art Institute of Chicago presented a major exhibition of his work. His visit was said to be a propaganda mission because Farre and other officers asked for more American planes and ships. But the tour also raised money for the American Fund for French Wounded.

After the war, Farre received the Legion of Honor and Croix de Guerre from the French government. He and Marguerite married in 1922. Settling in Chicago, Farre continued to paint – the Chicago River Bridge, football games at Soldier Field. The Smithsonian’s Air and Space Museum owns 75 of his World War I paintings. He died in 1934.

One year later, Marguerite married Dr. John F. Pick. Born in Austria, he would become a leading plastic surgeon in the United States. He studied at Rush Medical College in Chicago and at the University of Prague, where he became an assistant to Professor Frantisek Burian. This was a great honor, for Burian is considered one of the founders of plastic surgery.

Back in the U.S., Dr. Pick developed a theory about recidivism. He believed that performing plastic surgery on the faces of prisoners, to correct features that were deemed irregular or unattractive, would give them the confidence to reinvent (to borrow a twenty-first century word) themselves upon release.

Between 1937 and 1947, Pick worked at Stateville Prison in Illinois, where he performed 663 surgeries on 1,376 inmates. Of those discharged, 1.7% became recidivists. Pick published his results in medical journals, insisting that “the correction of physical defects would mentally straighten out many inmates.” The theory never caught on.

In 1949, Dr. Pick’s interest swayed from plastic surgery to cancer when he and several colleagues became obsessed with an anti-cancer drug called Krebiozen. A Yugoslavian doctor, Stevan Durovic, created it and brought it to the U.S. that year.

A prominent physician and vice president of the University of Illinois, Dr. Andrew Ivy, became convinced of the drug’s effectiveness. Others, including Dr. Pick and the eminent Senator Paul Douglas of Illinois, joined him.

There were clinical trials, and hundreds of physicians nationwide tried the medication for their patients. But the claims proved unsubstantiated and Krebiozen was discredited. The Krebiozen Research Foundation, led by Dr. Ivy, later accused the American Medical Association and American Cancer Society of subverting data. Lawsuits and trials would follow into the mid-1960s.

In 1952, John F. Pick announced that he had treated his wife, Marguerite, with Krebiozen during the last 15 months of her life as she fought breast cancer. She had died one year earlier with four society dames at her bedside.

*The details of Henri Farre’s experience appear in his book, Sky Fighters of France, Aerial Warfare, 1914-1918.