As a young journalist who covered the theater, Allan Forman hung around eavesdropping and hoping for a glimpse of the leading ladies.

In 1886, Allan’s long edgy article, “Around the Stage Door, Men Who Haunt It and Girls Who Pass through It,” was syndicated widely in the U.S.

Surely he spoke from experience in describing the many ways that men made fools of themselves by fancying actresses and singers, married and unmarried.

In 1900, he met and married his own actress, Xesia Yrsa Zephania Carlstedt.

Do you mean the Swedish-born Xesia Yrsa Zephania whose career never quite took off even though she acted in such memorable plays as “The Noble Son,” “The Pearl of Pekin,” and “The Corsair”?

Do you mean Xesia Yrsa Zephania who inherited thousands of dollars from her former lover, a Swedish baron named Falkenberg to whom she was promised in marriage by her father, a consul general whose home was located next door to the baron’s castle?

The papers reported that she ran away to America to be free of entanglements.

“A Man About Town,” starring Xesia, has just flopped in out-of-town tryouts. The cast practically walked back to New York, critics say. Arriving home, the hapless Xesia received a thick envelope from a lawyer detailing the bequest of “the man who loved her so well and so unsuccessfully.”

She probably did receive the money, although some whispered that in fact the baron had rejected Xesia because she lacked aristocratic lineage.

It’s not as if her family was undistinguished, however. Xesia’s father, Axel B. C. Carlstedt, descended from a long line of musicians and composers. The position of organist in the churches of Sodra Villie and Orsjo had been held by a member of the Carlstedt family for more than 130 years. 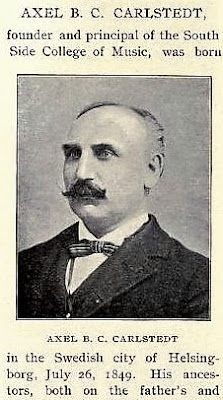 Upon arriving, he moved to Massachusetts, studied at the New England Conservatory of Music, earned a doctorate, married an American woman, and eventually founded the South Side College of Music in Chicago.

Axel fathered 11 children. Some were born in Sweden during his first marriage but the details are hard to figure out.

What matters is that he went about naming them “in the most delightful way,” to quote Mary Poppins.

Since his own name began with the initials ABC, Axel continued the pattern with his children.

The names of the last three children did not fit the alphabetical pattern but exceeded expectations for ingenuity. They were:

While Axel taught music and became a papa repeatedly, several of his children, including Xesia, gravitated toward music and theater. She toured the country drawing slight attention for her performances, for no Lillie Langtry was she.

Meanwhile, Allan ran his magazine, The Journalist, and wrote about everything. During the 1890s, he addressed “The Cigarette Question,” “The Ways of Blackmailers, a risky business that doesn’t always pay,” and “The Typewriter Question.”

He also complained about “Eating to Honor Somebody”:

It always seems a trifle absurd to me, to call together a lot of men to eat in honor of somebody. The respect expressed by inducing dyspepsia may be genuine. Ovations and oysters, sympathy and soup, releves and roasts, enthusiasm and entrees, homage and hominy, compliments and champagne, may all go very well together but . . . I should prefer a sandwich and a cup of coffee in a quiet corner.

After their marriage, Xesia and Allan lived in Brooklyn until Allan’s father died in 1908. Then Allan retired and began a renovation and expansion of Nabichaugue, the family’s Long Island estate. He and Xesia lived there for the rest of their lives.

After Allan’s death in 1914 the Baroness, as she now started to call herself, drew quite a bit of publicity when she started farming at Nabichaugue to help the war effort.

It may be a far cry from singing grand opera in the presence of cheering thousands to growing seed corn . . .  but it is understood that Mrs. Allan Forman of this place agrees that producing seed corn, when you hit it right, is fully as pleasant and almost as remunerative as appearing nightly in the footlights.

She was an acclaimed opera singer all along.