Once there were two women named Edith May, and coincidentally both of their surnames started with a “P.”

On top of such fortuity, both women were born in Minnesota and graduated from the University of Minnesota.  Each launched her career there; each in the field of education.  Both moved to New York and never returned to their native state.  But they did not know each other.

For a long time I have juxtaposed them in my mind.  It’s not just the coincidences listed above, but also the allure of their American lives.  Neither married.  Both descended from English settlers.  Both were very serious people.  One of the women lived to the age of 98; the other, 96.

These two could have been Victorians, but they cast off the demon.

Edith Penney was born in 1878, the daughter of Frederick Constant Penney and his wife, May.  The descendants of New England farmers, Frederick and May were swept into the great westward movement during the early 1870s when the Civil War was a fresh memory.  In a wagon they traveled to Minneapolis, whose population would soar from 13,000 in 1870 to 165,000 in 1890.
Soon after they arrived, Frederick zoomed into real estate.  He purchased land that would eventually be incorporated into the new city, and improved it by grading and paving the streets.  He made a lot of money, and then became a builder.

Although Frederick lived to the age of 108, he never again saw Canaan, Maine, nor his father, Uriah, and brothers and sisters Sylvanus, Almira, Arvesta, Isaac and Silas.

However, Frederick and May would return east in 1925 when Edith, now an English teacher, was hired as high school principal in a village just outside New York City.  The family bought property in the town next door – far more affordable – and Frederick built a stone house that still stands, its back to the woods and a meandering creek.

Edith Phelps was also an educator, but in a different way from Edith Penney.

Born in 1881 in Beaver Falls, Minnesota, she too was the daughter of an East Coast transplant.  Her father, Charles Levi Phelps, had been a little boy when he and his family departed from New York before the Civil War.  Charles would meet and marry Alice, a Wisconsin native.  He worked in a sheet metal plant, as a grocer, and as a foreman in a flour mill.  The family moved around the city as his income dictated.

When the University of Minnesota beckoned to Edith and her younger sister, Aura Idella, the parents encouraged them to go.  Upon graduation in 1907, Edith and Aura became teachers.  Then an unusual opportunity came along.

For nearly 10 years, a Minneapolis entrepreneur named Halsey W. Wilson had capitalized on rising literacy among Americans.  He, too, was a graduate of the University of Minnesota, and owned a bookstore near campus.  As the twentieth century loomed on the horizon, Wilson noticed a trend.  His customers increasingly asked for specific articles, or for all articles on one particular topic.  He started reprinting these articles as a side business.

But how did the readers learn about the articles they sought?

Only by word of mouth, Wilson realized.  There was no place to go look things up, no compendium that listed recently published material.  So he started to produce digests of articles and books, a book review index, informational handbooks, bibliographies, and, perhaps most famously, the weighty The Readers’ Guide to Periodical Literature, each volume of which required a crane to be lifted from a library shelf.* 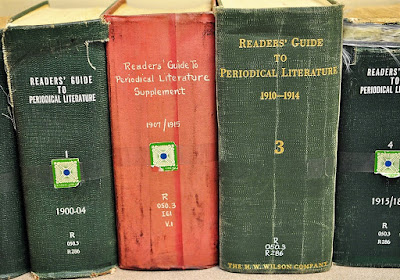 These reference guides may sound dull as dishwater.  But they were extremely important to enthusiastic readers.  Schools, libraries, scholars and students – no one could get information fast enough.

See post on June 26, 2019, for part 2.
*The H. W. Wilson Company is still in the information business, although today its products are largely digital.