The School Superintendent Who Needed a Home

Needless to say, the members of the board of education were shocked to discover that the superintendent and his wife and children had been living in the local high school.

At the end of each day when the teachers, students, and coaches were gone, when the drama and orchestra rehearsals had wound down and the custodians had banished the last banana peel and crumpled math quiz – the superintendent would make his way to the wing of the school where vocational classes were held.

Warily he would usher his family into the rooms occupied by the school’s home economics department.  There was a bedroom and bathroom, kitchen and living room.  Nothing fancy, but furnished and well-lit.

Good enough for the family to relax, prepare and eat meals, complete homework, wash up, and sleep through the night.

It was the fall of 1945 in Eastchester, N.Y., a town in the New York City suburbs that started life as a seventeenth-century English settlement.  Within its five square miles, the direst housing shortage in the nation’s history had come home to roost.

Worst of all was that the returning veterans had to scramble for places to live.  “Dog-tired soldiers can’t come home to Detroit.  There aren’t any houses,” according to a headline in the Detroit Free Press.

A classified ad in the Omaha World-Herald offered “Big ice box, 7 x 17 feet inside.  Could be fixed to live in like a trailer.”

The housing famine, as some called it, preceded the postwar boom in housing and roads. Out on Long Island, Levittown’s 17,000 houses would go up in a record four years, but the farmers who sold their land to the builder were harvesting their potatoes until construction started in 1947.

It was estimated that the nation would need 12.6 million new dwelling units during the first decade after the war.

But major shortages stood in the way of a quick end to the housing crisis: a shortage of labor and a shortage of supplies, their destinies entwined.

While the Army had released large amounts of lumber to industry, the timber remained standing in the woods of northern California, Oregon, Washington State, and Idaho.  The reason was that 60,000 American Federation of Labor (AFL) members had struck in nearly 500 lumber camps and logging mills, asking for $1.10 / hour.  No one held out hope for quick mediation.

Labor was missing across all manufacturing sectors.  Big American Radiator & Standard Sanitary Corp., which formerly turned out 3,000 bathtubs per day, was now fortunate to produce 3,000 tubs per week.  Steel production had slowed, with capacity output not expected until spring of 1946.

Keg of nails?  How quaint.

As housing starts stalled, veterans and labor organizations looked reflexively to the government for a solution to the crisis.

Three senators – Robert F. Wagner of New York, Robert H. Taft of Ohio, and Allen J. Ellender of Louisiana – started work on a bill that would “provide a decent home and suitable living environment for every American family.”  This bill also mandated the clearing of urban slum areas to create low-rent housing, which created new problems related to the displacement of poor people.

Meanwhile, private industry recognized that the time had come to reject price controls and set its own production goals or else submit to interminable government regulation.

Indeed, after Congress finally declared a national housing emergency in May 1946, President Truman took steps to free builders from government constraints on supplies and construction.

But he met fierce opposition from veterans’ groups who opposed the government’s removal of priorities, subsidies and market guarantees.  They worried that veterans would be unable to afford the new housing.  The stalemate lasted several years.

Back in Eastchester, Superintendent Ward I. Miller, who had moved his family into the high school, was not a veteran.  Perhaps he wanted to save money, or his salary did not cover housing costs, or he could not find just the right home.  Which it was remains unknown.

Despite their shock, the school trustees did not fire Miller.  He stayed on until 1946 and then became superintendent of schools in Wilmington, Delaware.

One must admire Miller’s clever choice of a place to live.

Beginning in the late nineteenth century, as student enrollment soared, U. S. public school administrators accepted the charge to teach homemaking.  School buildings were constructed or retrofitted with small apartments where girls learned to cook and clean under the tutelage of home economics instructors who knew all the best recipes for gruel.

Since the home economics curriculum modeled hygiene, diet and family life, it fit neatly with the overarching goal of Americanizing immigrants.  In Eastchester, such an effort would have been directed at the daughters of Italian immigrants who began moving to the town during the mid-1920s.

Surely the Millers left the apartment in immaculate condition when they tiptoed out each morning. 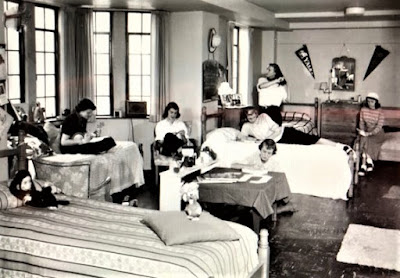