My computer always warns me not to capitalize the word “The” in “The Bronx,” but I know it’s wrong.  My father, a proud Bronx boy, always had the last word in the matter.  Thus, after receiving our childhood gifts, my brother and I addressed all thank you notes to our grandparents at 215 East Gun Hill Road, The Bronx, New York.

They had moved into a two-bedroom apartment in the Art Deco-ish building sometime during the mid-1930s. My father and his brother grew up there.

Gun Hill Road has existed for more than 200 years.  It gets its name from a Revolutionary War skirmish in which the colonists hauled a cannon to the top of a hill and fired on the British.  That occurred in the middle of winter in 1777.

Well over a century later, in 1898, New Yorkers voted to consolidate the five boroughs (Manhattan, Brooklyn, Queens, The Bronx, and Staten Island) into the City of New York.  Consequently, vast swaths of land in The Bronx suddenly became valuable and made many a real estate fortune.

By 1905 there was subway service from Manhattan to The Bronx.  In 1917, Gun Hill Road became a stop on the IRT line.

My grandparents’ neighborhood drew Catholics and Jews who had enough money to flee Manhattan, leaving behind the crowded streets and tenements.  They craved space, trees, and air.

Still, every day my grandfather took the subway back to Manhattan.  He was in the fur business, a trade he had brought with him from Lithuania in 1914.

In his Eastern European accent, he told a story about his family’s fur shop in Vilnius.  One day, the Cossacks rode up to the front of the store, dismounted their horses, and stormed inside.

“Give us the furs!” they told his grandmother.

She flung her body across the minks that were piled on a table.  The soldiers shot her to death.

My brother and I liked to hear this story and our grandfather seemed to like telling it to us.

At the time that my grandfather arrived in the United States, manufacturing was scattered all over Manhattan rather than consigned to one area.  You could find all kinds of industry from the southern tip of the island up to 59th Street and farther north along the East Side.

But in 1916, the same year that urban reformers pushed through the nation’s first citywide zoning code, local businessmen formed The Committee to Save New York.  The idea was to consolidate industry below 32nd Street and west of Sixth Avenue.  This would have the effect of restoring uptown real estate values for businesses and homeowners.

Surprisingly, everyone got on board.  Within a few years, most garment manufacturers had moved their factories and sweatshops to the new industrial district.  The fur shops, clustered around Seventh Avenue at 28th Street, became part of it, too.

Within that small area, my grandfather moved around a lot: 214 West 28th to 150 West 28th to 52 West 22nd to 67 West 23rd.  These buildings have all been demolished except for a four-story brownstone walk-up built in 1851 when Franklin Pierce was president.

Since my grandfather created designs for fur shops and department stores, he did not need to have a vault and a showroom – just enough space for worktables and the tools of the trade.  He might have needed refrigeration for the furs.

He did well until the Davy Crockett craze of the late 1950s, when he jumped in late and ended up with too many raccoon tails.

When my grandfather came home to Gun Hill Road, he sat down in one of the easy chairs zipped into plastic, smoked a cigar, and watched television while my grandmother fussed around him.

On her left leg she had a large brown birthmark, so visible that a bureaucrat noted it in her naturalization papers.  The mark strongly resembled a stain in their bathroom sink that was caused by a long-running leaky faucet.  The child’s mind insisted that there had to be a connection between the stain and the birthmark, but what was it?

Occasionally my parents went away for the weekend and left my brother and me with our grandparents.  If the day was warm, we would all walk over to the “Oval,” a large park built during the New Deal on the site of an old reservoir.  We’d sit on a bench while bicycles and balls flew by.

Back in the apartment, in a corner of the second bedroom, a battered wooden rack held a couple of old magazines.  One was an issue of Look with a big story about Jackie Kennedy, commemorating one year since the president’s assassination.

I liked to sit on the wooden floor with the window half-open, the breeze moving the curtains, looking at the pictures.

Even then, it surprised me that my grandmother held onto the worn magazine, for she spent a lot of time clearing closets and tossing out anything that was past its prime.

She wanted everything to be new with no reminders of the old country in the apartment on Gun Hill Road. 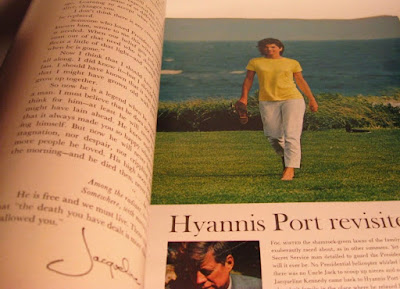