A few weeks ago when I wrote about the journalist James L. Ford, my husband said that he liked the post a lot. Naturally, my first thought was that he would want to hear more.

Indeed, there is a postscript, a short piece called “The Dying Gag” that Ford published in the late nineteenth century. It’s about a tiresome joke that keeps making the rounds of the New York variety shows, the type of joke that has been delivered hundreds of times and now elicits groans instead of laughs.

Ford sets the scene outside the stage door: “. . . a wild blustering night, and the wind howled mournfully around the street-corners, blinding the pedestrians with the clouds of dust that it caught up from the gutters . . .”

Before long the pedestrians come in from the cold. They stand around backstage while a frail figure – the “Old Gag” – makes its way to its dressing room, dozes off, and is awakened by the stagehands who cluck about how he should keep resting. Nevertheless they help him onto the stage.

“And so you say, Mr. Johnson, that all the people on the ship were perishing of hunger, and yet you were eating a fried egg. How do you account for that?”

As a wail rises from the audience, the Old Gag stumbles back into the arms of the stagehands. They carry him to his dressing room but cannot rouse him.

Returning to the book to make sure to get the joke right, I noticed that my copy, published in 1896, once belonged to a man named John Tatlock, Jr. I decided to chase him. 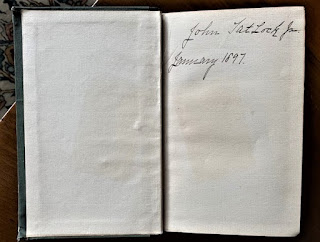 At first it appeared that there were two men named John Tatlock, Jr., both born in 1860. Each man plowed through the nineteenth century and died in 1926, having reaped the harvest of upper-class American life.

One Tatlock was a scientist and the other an actuary with the Mutual Life Insurance Company of New York. Both were born in Williamstown, Massachusetts and graduated from Williams College, each like his father.

Of course, it turned out they were the same person.

Even as a child, John Tatlock, Jr. had a passion for astronomy. During college he studied with a brilliant astronomer, Truman Henry Safford, who incidentally was a calculating prodigy. * Tatlock graduated in 1882 and stayed on for a year to continue his work with Safford at the Williams College Observatory, the nation’s second oldest one in regular operation (erected in 1836).

Tatlock then became the astronomer at the Washburn Observatory at the University of Wisconsin, Madison. Subsequently he was appointed Professor of Astronomy at Beloit College. Tatlock’s particular interests were occultations of stars by the Moon, and meridian circle observations. The latter involves the movement of celestial bodies across a local longitude. (Someone correct me, please.)

By the 1880s many colleges and universities had added astronomy to their curriculums and were trying to raise money to build observatories. But Beloit couldn’t make it work and Tatlock resigned in 1885.

“The funds of the college are so low that the authorities do not feel justified in keeping the observatory in a state of scientific activity,” the Chicago Tribune reported.

“This is another one of the many cases in which science does not pay except as it can be placed directly at the service of some business-man.”

Tatlock promptly moved back East. He married a socialite, Kate Chamberlin, in 1886, and was offered the plum position of associate actuary at the Mutual Life Insurance Company of New York. Later he worked for Prudential Insurance, became a bank president, and founded his own actuarial firm.

A fellow of the Royal Astronomical Society of London and the New York Academy of Sciences, Tatlock remained devoted to astronomy. In 1897 when the Yerkes Observatory opened near Geneva Lake in Wisconsin, he was among the honored guests.

Scientists from All Over the Country Will Be There.
TO SEE THE WONDERS
Hitherto Hidden From the Sight of Man.

One must wonder whether Tatlock would have preferred to stay an astronomer.