Sweet seventeen and manly nineteen – that was the verdict of fashionable society when Louise White wed Walter Suydam, Jr. on June 10, 1903.

“A boy-and-girl wedding,” everyone clucked. “The bride is still a school girl,” the papers reported.

Louise and Walter were the youngest couple ever married in the Church of the Heavenly Rest at Fifth Avenue at 45th Street, where most of the gowns and decorations were pink because the color had been the bride’s favorite since she was a little girl. That would have been around the time that she met Walter.

Both descendants of old New York families, Louise and Walter grew up playing on the beach, walking and riding in Central Park, and frolicking at birthday parties in the grand homes of their parents. This era was one of the heydays of social exclusivity in the United States.

While she was quite young Louise announced to her mother that she intended to marry Walter, and all seemed to go according to plan.

After their honeymoon, Louise and Walter settled into a house on the grounds of Manowtasquott, a quintessential Gilded Age estate that Walter’s father built in 1886 in Blue Point, N.Y.  The Queen Anne-style mansion overlooks the Great South Bay on land that originally belonged to the Unkechaug Indians.

In 1905 a daughter was born to Louise and Walter but she died at the age of six months.  By then, Louise had become bored living at Blue Point year-round. She itched to return to the city and put on her dancing shoes.

Alas, it turned out that Walter, once enrolled at New York University School of Law, had been advised to abandon his studies and take up an outdoor life. This fit well with his desires. Although he had been reared to take his place in society, balls and card games held little charm for him. What he loved most was sailing on his 42-foot yacht, Nemesis, and casting for sea-bass, flounder, mackerel, and bluefish.

“While bluefish was good off Fire Island, fifteen miles away, during the summer,” Walter once explained,

I was in the habit of leaving on my sloop at sundown and staying away all night because that is the only time that one can catch bluefish successfully.  In the mornings I returned with my catch, of course, selling my fish in the market just as any other fisherman would. When I reached home, I never noticed that anything was wrong.

Indeed, Walter must have been fixated on the fish and not his wife, for Louise had become infatuated with Fred Noble, the 20-year old son of a Brooklyn plumber whom he had hired five years earlier to help around on the yacht. During the summer, Fred and his father lived in a cottage near the railroad tracks in Blue Point. 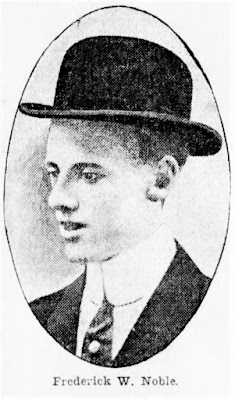 Now it was 1911, and Walter surprised Louise with her very own automobile. She taught herself to drive and before long she and Fred were taking trips together and, the servants gossiped, sharing milk and cookies in her bedroom.

To top it off, during the Blue Point Improvement Society’s annual fair, everyone observed Fred hanging around Louise’s booth paying her extravagant attention.

On Friday, September 8, Walter confronted Louise at their home. After they spoke, he moved to his father’s house because, he would state in court, he could no longer live under the same roof with her.

On Tuesday, September 12, Louise asked her maids to help pack her belongings and boarded a train to the city. The next day Walter announced that his wife was missing.

“This trouble has come upon me like a thunderclap,” he said.

I was convinced that my wife was supremely happy.  She had no wish that I did not immediately satisfy.  Only a few weeks ago I bought her a handsome new automobile for her own use.  She had her yacht, her horses, everything a woman could wish for.

Walter and newspaper readers nationwide soon learned that Fred and Louise were ensconced at the Regina Apartments on West Twelfth Street in Greenwich Village.  Dressed in a white silk blouse, black skirt, black silk stockings, and black suede slippers, Louise invited reporters into the three-room apartment for a conversation.

Reclining in a Morris chair with her head thrown back, wearing a smirk on her full red lips (according to an observer), Louise declared that she and Fred would not hide their love because they were unashamed. We are very happy, she said, and quite certain that the passion would last.  Society would have to accept their unconventional arrangement.

In the meantime, Walter moved like lightning to obtain a divorce. Just two weeks after Louise’s departure, his case was tried in New York State Supreme Court with testimony taken in 30 minutes. A late August rendezvous between Fred and Louise lay at the center of the servants’ accounts, with Mary O’Rourke describing the sound of four shoes dropping onto the floor of Louise’s bedroom above where she stood on the first floor of the Suydam house.

“All smiled at this and even the Court’s mouth was seen to twitch,” according to a newspaper account.

In January 1912, Louise and Fred married.  But all was not well.  They quarreled in public and Louise confided to Fred that Walter had been, in fact, her one true love.

To be continued.
https://www.throughthehourglass.com/
at Wednesday, August 26, 2020