I always hoped to circle back to Earl Starrett Goudey, born in North Adams, Mass. in 1895, a man who took a circuitous path to his vocation.

Earl Goudey spent 35 years teaching biology and sex education to students at the public school in Bronxville, N.Y., a suburban village outside New York City, 29 minutes by train to Grand Central Terminal. Unruffled by controversy, he worked calmly with parents and pastors who wished to keep a lid on things.

The eldest son of Nova Scotian immigrants Henry and Mary Goudey, Earl battered his way out of his boyhood home and navigated through the thicket of church and school before launching himself into the world.

Mary Goudey died of consumption in 1906, leaving her husband with four children, the youngest just two years old. Their father, Henry James Goudey, was a minister affiliated with the Advent Christian Church. He preached in North Adams and Lynn, Mass., Hartford, and Brooklyn.

Reverend Goudey often delivered a speech, “Facts About Hell,” at the local YMCA. With his mother, sister, and brother, Henry had sailed on the schooner Gladiator from Yarmouth to Boston in 1871 and imbibed some sort of gladiatorial ferocity along the way.

He directed his abusive temperament at Earl, forcing the boy to memorize long passages of the Bible as punishment for scrappy behavior. At the age of thirteen, Earl ran away from the family’s wood frame home in Lynn and became a loom setter. (During the late nineteenth century New England’s textile industry had begun to shift to the South, but plenty of cotton and woolen mills remained.)

Earl finished high school at night and, trying to please his father, entered the Newton Theological Seminary in Newton, Mass. In the spring of 1917, on both the verge of graduating and the eve of the U.S. entrance to World War I, Earl headed to the Boston Navy Yard and enlisted. He joined the Navy Medical Corps as an apprentice seaman and served as a Pharmacist’s Mate First Class.

A PHM1 is a petty officer who – under the supervision of physicians – offers care to naval personnel. In the course of his work on a hospital ship, Earl came to know David Linn Edsall, dean of the Harvard Medical School and an expert in preventive medicine and public health. They worked together on a study of the 1918 flu pandemic, and Edsall encouraged Earl to become a doctor.

First he needed a college degree, so he enrolled at Boston University where he met his first wife, Marjorie Pelton. Her father, who ran a business college, told Earl to skip medicine and go into the brave new world of sales.

Once again Earl danced for others, climbing the ranks to become a top salesman in the soap and ice cream businesses. To assuage his conscience, he also directed “boy’s work” at the Tremont Temple Baptist Church in Boston. He would always have a soft spot for wayward boys.

Imagine Earl during these years. Is he frantically trying to find a place in the confusing decade that followed World War I? Is he philosophically ticking through the professions in order to figure out which one is right for him?

When I interviewed Earl’s son Pelton in 1997, he did not know how Earl came to the attention of the superintendent who presided over the nationally-known progressive school in Bronxville. But Willard W. Beatty had a nose for great teachers, and in 1928 Earl joined the faculty.

During the 1920s, Reverend Goudey remarried and divorced and remarried. In 1936, he hopped on a train to Miami, where he felt welcome and decided to stay a while. The Adventists gobbled up his screwball theories about astronomy and physics.

“The earth is an outstretched plain,” he explained, “founded upon the waters of the deep; the sun, moon and stars in motion above; over the whole being the firmamental vault or floor of Heaven.”

In 1941 Henry published Earth Not A Globe, Scientifically, Geometrically, Philosophically Demonstrated, in which he summoned 75 reasons to explain why the earth is flat.

It was as if he couldn’t stop punishing Earl but realized he’d have to swap out Bible passages for scientific bunk in order to torture his son to the greatest extent possible. 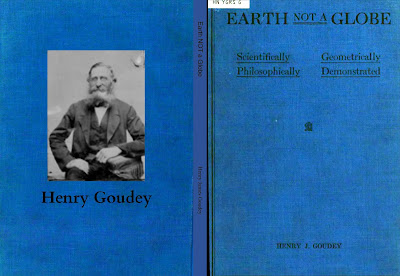