I can’t wait to get back to 1941 so that I can see Mary Ann Horneman at the annual convention of the South Dakota Federation of Women’s Clubs.

She’s been invited there to give a presentation about America’s First Ladies: sing old-time songs, tell stories, show off her collection of First Ladies dolls.

Each doll—Adams, Coolidge and the rest of the gang—is dressed in a copy of the gown worn by her corresponding mannequin in the First Ladies Hall at the Smithsonian Institution.

Mary Ann made the dolls and their costumes, painted their portrait faces, and stitched their satin skirts and lace bodices.

She launched her career as a lecturer and entertainer after publishing a small book, 5”x7”, that contains photographs of her dolls and a few paragraphs about each First Lady. Since then, she has been traveling around the Dakotas, Nebraska, Iowa, and Kansas, visiting every women’s group that needs a speaker.

It’s real tea party stuff. Crowned with a headdress, swishing her own satin skirt, Mary Ann presents the First Ladies as the finest examples of American womanhood, each a study in courage and beauty. The audience clucks and nods.

Before Mary Ann introduces her dolls at the big meeting, Gertrude Null, president of the Federation, will speak about “The Importance of Being a Woman.” Miss Null is a music teacher who grew up in Huron, S.D. not too far from the Minnesota border. Incorporated in 1883, Huron rose on the banks of the James River, blessed by the Chicago and Northwestern Railway.

Huron is not unlike the city of Beloit in north central Kansas, where Mary Ann was born and would spend most of her life. Perched over the Solomon River, Beloit boomed after the Civil War thanks to the Missouri Pacific and Union Pacific Railroads, which passed through town carrying grain and passengers.

Gertrude and Mary Ann were born, respectively, in 1889 and 1886. They were the daughters of wealthy men. Mr. Null practiced law and Mr. Horneman owned a furniture store that bulged with overstock.

Local and regional women’s organizations, like the South Dakota Federation, began to proliferate after the Civil War. Most of them sponsored pleasant social gatherings with performances and lectures by members. During the 1890s, however, the women’s club movement really took off. It grabbed thousands of white women like Mary Ann and Gertrude whose hometowns were scattered across the Great Plains.

Having imbibed the Victorian niceties of their mothers, Mary Ann and her peers tended toward the tinkly side of things. Yet they were very much a different generation, one that reached tentatively for new ideas. They wanted to learn about social issues like child welfare, took sides on Prohibition and women’s suffrage, and believed in reform, albeit incrementally. They agreed on “The Importance of Being a Woman,” but few met the definition of first wave feminist.

The women’s club movement was segregated, of course, so Black women began to form their own organizations around the turn of the twentieth century. Some grew out of sororities at historically Black colleges and universities and coalesced around the perennial campaign for anti-lynching legislation.

That fight was still going on, right in the middle of the New Deal in March 1936, when 18-year old Hilda Jones, a Black student at Girls Commercial High School in Brooklyn, won a contest to design a print for a dress to be worn by Eleanor Roosevelt. 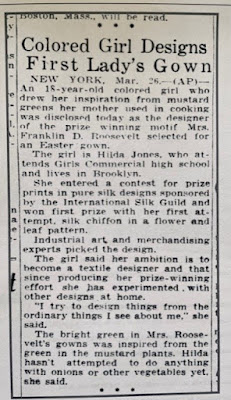 First prize was $75, a stunning amount of money for the daughter of immigrants from Barbados whose father worked  as a garage attendant. “I’ve liked to draw for as long as I can remember,” Hilda told a reporter. Her design was inspired one Brooklyn night by the mustard greens that her mother was preparing for dinner.

The story ran on the first page of The Voice of Colorado, a weekly with a largely Black readership, which had so little use for the Roosevelts that it endorsed Alf Landon for president that year. The bitter fight to organize the Southern Tenant Farmers Union in Arkansas, and the W.P.A.’s blind eye toward its own inequitable distribution of resources, dwarfed the story with the headline “Negro’s Design Bought by Mrs. Roosevelt.”

By the time that Mary Ann Horneman started toting around her First Ladies show, Hilda had a factory job in one of the many manufacturing plants that once flourished in New York City. She never became a designer. After 1940 she disappears from record.

Hilda's connection to Mary Ann and Gertrude is a barely visible thread, but it exists.

“The buried talent is the sunken rock on which most lives strike and founder.”—Frederick William Faber (1814-1863), British theologian and hymnist 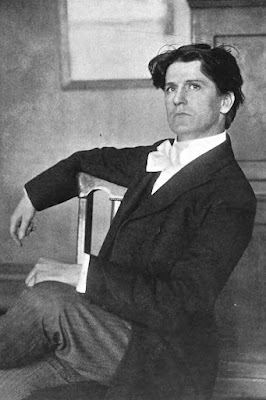