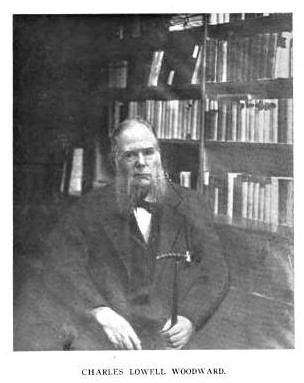 If you were searching for something to read in colonial America, you might have picked up Gulliver’s Travels, Poor Richard’s Almanack or, of course, the Bible.

But soon enough, the rising book trade along the East Coast would have increased your options exponentially. By the mid-eighteenth century, shops flourished in Boston, Philadelphia, and New York, with titles in history, theology, science, and travel in greatest demand.

The American bookseller had a notorious persona: gruff, tough and fiercely competitive. Many were rude without being malevolent, but occasionally one might sabotage another with a false accusation of fraud—passing along reproductions of ancient texts—or avoiding customs taxes with fake receipts.

By the 1890s, these sellers were a dying breed. Among the few remaining bookmen of the nineteenth century who retained his scowl and his integrity until the end, Charles Lowell Woodward closed the door upon this life on September 17, 1903.

His passion for books went back to his childhood in rural Maine, inculcated by his father Caleb, an abolitionist and jack-of-all-trades, whom he revered. But Charles didn’t want to hang around the farm. He had the urge for going, as Tom Rush sang.

At the age of 20, he took off for California, delirious with gold fever. He sailed around Cape Horn and found work at the Poverty Hill Mines near the Yuba River, about 100 miles northwest of Sacramento. While building a well, he fell into it and broke his ankle. This put an end to his mining career and he headed back east.

Ankle problems prevented Charles from serving in the Civil War, so he joined the New England Society, a charitable organization that was old even then, and helped care for hospitalized soldiers and their families.

When the war was over, Charles answered the call of the Pennsylvania oil fields but a flood left him homeless with two trunks of possessions. One was packed with books.

He landed in New York City at the age of 32.

There, while working as an agent for Bradstreet’s, Charles began to haunt the old bookshops that were clustered downtown along the narrow streets. In the morning, up went the striped awnings. The sellers hauled wooden bins full of prints and maps onto the sidewalks and rearranged their window displays.

Some of the stores were windowless and light entered only through the front door, if it happened to be open. Dingy and dusty, the air inside nearly as congested as the sky above the industrial waterfront, the shops nonetheless attracted plenty of luminaries.

Perusing the shelves, you might spy former President Ulysses S. Grant, the actor Edwin Booth or the Reverend Henry Ward Beecher, not to mention Tammany pols, capitalists, and Bohemians. Swiftly obsessed, Charles joined the ranks of the collectors. Americana and Mormonism were his particular interests.

In 1875, Charles finally possessed enough books and savings to open his own bookshop, located in a dark room at the rear of the second floor of 78 Nassau Street. He kept the store tidy and broom-swept and took the unusual step of shelving the most valuable books with the titles facing inward. Thus, he maintained absolute control over who handled them.

Charles disdained presumptuous customers. His “rough and often repelling exterior fairly bristled with hatred of humbug, cant, and pretense,” wrote one of his colleagues.

He found genealogical research especially contemptible. Customers in search of family trees were handed the “donkey catalogue,” a list of books related to ancestral lineage, its cover decorated with a picture of a donkey.

But Charles had a special fondness for certain clients, including the librarian and historian George H. Moore, once dubbed “Clio’s high-priest.” (In Greek mythology, Clio was the muse of history.) Moore worked for many years at the New-York Historical Society and the Lenox Library, a precursor to the NYPL. He had the habit of dropping by 78 Nassau Street during the early evening. After Charles locked up around 9 o’clock, the two men would sit on a bench in City Hall Park and talk far into the night.

Oh, to hide in the shrubbery near the fountain and eavesdrop on their discussions!

In 1902, Charles was hit by a wagon that came barreling down Nassau Street, and his health began to decline. One of his daughters—perhaps Polly or Daisy—started to help around the shop. But it was clear that the business could not continue after his death and he made the decision to sell his stock and close the store.

After World War I, new construction invaded Nassau and the other old streets. Park Avenue South, eight blocks between Union Square and Astor Place, became Manhattan’s “Book Row.” Further on, that neighborhood would have its own obituary.

*from Booksellers of Old New York and other papers by William Loring Andrews (1895).