Attempts by state legislatures to prevent women from procuring Misoprostol and Mifepristone through the mail recall old times in a deeply concerning way.

Those were the days of Comstockery.

Anthony Comstock (1844-1915), who spent more than forty years persecuting Americans for engaging in activities that he deemed obscene, started his career in 1873 when he suppressed an “objectionable” book in the store where he worked as a clerk.

That year he established the New York Society for the Suppression of Vice and became the unpaid enforcer of the Comstock Laws, which he had persuaded members of Congress to pass with alacrity.

The Comstock Laws criminalized the possession and conveyance of lewd, lascivious, filthy, indecent and disgusting material and objects. Those words actually appeared in the Federal Criminal Code, Section 211, from which all Comstock Laws descended.

Thus the United States Post Office was among the private and public institutions, organizations, and businesses—including an old bookstore which stocked antique porn—that fell under the control of Anthony Comstock, special agent for the postal service.

Right up until 1914, the year before he died, Comstock initiated 3,697 state and federal arraignments of Americans whose behavior and/or possessions he found obscene. Of these, 2,740 pleaded guilty or were convicted.

Information about birth control—“prevention of conception”—fell into that category, as discovered by Margaret Sanger, an advocate for reproductive rights who published and distributed a newspaper, The Woman Rebel. Sanger, a nurse and social worker who lived in New York City, was especially concerned about the plight of working-class women who lacked information about how to prevent pregnancy and any way to get safe, effective contraception. Meanwhile, she argued, wealthy women had access to whatever they needed.


After Sanger mailed out three issues of The Woman Rebel, Comstock became enraged. In August 1914, he had her indicted for violating the law but she was released without bail and fled to England. In Sanger’s absence, her friends distributed 100,000 copies of Family Limitations, a brochure about contraception.
Subsequently, one of Comstock’s agents tricked Sanger’s husband, William, into handing over several brochures upon request. William Sanger was indicted and convicted and sentenced to thirty days in prison.

“The sooner society gets rid of you the better!” one of the judges proclaimed from the bench.

When Margaret Sanger returned to the United States in 1915, she, too, stood trial. After her five-year old daughter died of pneumonia, the charges were dismissed. She went on to found the nation’s first birth control clinic and crusaded for reproductive rights until her death in 1966. Five years later, the Comstock Laws were abolished.

It is time for the people of this country to find out if the United States mails are to be available for their use, as they in their adult intelligence desire, or if it is possible for the United States Post Office to constitute itself as an institution for the promulgation of stupidity and ignorance, instead of a mechanical convenience. 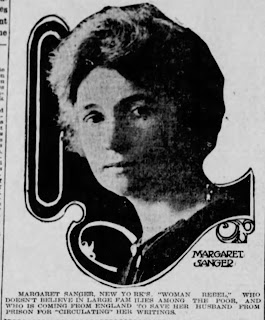