The child’s parents, Mabel and William Beatty, met at the University of California-Berkeley during the early 1880s when the university was a scant fifteen years old. With Mabel’s younger sister Maude and older brother Earle, the couple made a foursome.

Student life was in full swing. Yearbooks reveal that Mabel, Maude, Earle and William participated enthusiastically in literary and glee clubs. All served as class officers. Earle hoped to become a novelist and the two sisters, teachers. The eldest of three brothers whose parents emigrated from Ireland, William planned to study law.

“We have laid her course,” wrote Beatty of his peers in his essay as historian of the class of 1883; “straight for the noblest and highest.”

Yet that he could not do. In one of William Beatty’s early twists of the truth, he reported that his father, a policeman, had “conducted important milling operations and achieved large fortune several times.” Deception would be William’s downfall.

But for now, he studied law, set up a practice, and wooed Mabel for seven years while she lived and taught school in Livermore, on the eastern edge of the Bay Area.

I imagine that Mabel had reservations about William since the courtship took so long.

Finally married in 1890, they moved into an apartment in San Francisco and welcomed baby Willard a year later. William’s practice flourished. He commissioned an elegant home to be built at 2047 Pine Street, where the family moved in 1900.

But one year later Mabel died, and within a few months William fled creditors as a major embezzlement came to light.

“No one accuses him of dissipation,” reported one newspaper.  “He only lived beyond his means.  Jewelers, wine dealers, dry goods merchants, tailors, furniture houses, butchers, and vegetable vendors have claims against him.” The Pine Street house was sold and 10-year old Willard went to live with his uncle Earle. 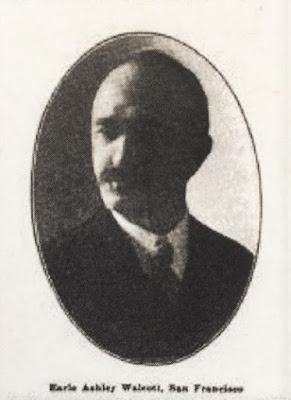 By 1910, he had published three novels – Blindfolded, The Open Door, and The Apple of Discord -- thrillers set in the Bay Area which drew on his detailed knowledge of the city’s underbelly:

I have kept pretty closely to California in my writings. . . I’ve gone back to an earlier day in the city’s history – perhaps led by boyhood impressions. . . I have also taken the modern city a few months before the great conflagration, [now] replaced by cleaner if less picturesque structures.

California politics, culture, and social change – Earle Walcott lived and breathed in the thick of it.

He worked with the progressive Governor Hiram Johnson, the reform Mayor James Phelan, and the naturalist John Muir. He debated the future of the Hetch Hetchy Valley, public education, and California’s treatment of American Indians.

Earle Walcott knew the traveler and author Robert Louis Stevenson, who counted Sonoma and Napa counties among his favorite places. He participated in the Bay Area’s Bohemian arts scene during the late 19th century, mixing with Jack London, Ambrose Bierce, and Frank Norris.

Over time, Earle focused increasingly on the civic arena. In “Calamity’s Opportunity,” an essay which appeared in the Overland Monthly soon after the San Francisco Earthquake, Walcott wrote: “The great fire gives to San Francisco the opportunity to snatch profit out of disaster.”

He urged adoption of a grand city plan that the Chicago architect Daniel H. Burnham had presented to the board of commissioners one year earlier.

In 1909, Earle became executive secretary of the prestigious Commonwealth Club of California, whose members studied burning issues of the day. From this elevation, he set much of the reform agenda for the state as well as his city for two decades to come.

And in 1912, Mayor James Rolph appointed Earle to the Civil Service Commission. Of course he soon became its chair and continued to affect nearly every aspect of life in San Francisco until his death in 1931.

Arguably, Earle’s greatest influence was reflected in his nephew, who came under his wing at such a young age. Earle’s ideas and interests would kindle Willard’s lifelong pursuits.