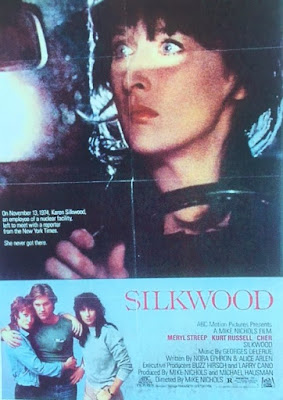 Watching Jacob Bernstein’s new documentary about his mother, Nora Ephron, reminded me that she co-wrote the screenplay for the 1983 film, Silkwood. The true story concerned a worker at a plutonium processing plant who was contaminated and possibly murdered after discovering that corporate executives knew about radiation leaks.

I heard the movie was on its way to theaters quite a while before it opened. The public relations firm for which I worked had been hired by Kerr-McGee (the company that owned the plant) to persuade as many people as possible that the movie was inaccurate.

The company had another problem. We learned that the Communications Workers of America had produced a play based on the Silkwood story, with performances well-attended in cities nationwide.

So I was placed on assignment. Go to Milwaukee, watch the play, take notes, and report back on the script and audience reaction. Stick around afterward to hear as many comments as possible.

My husband and I headed north from Chicago with a reservation for an expense-account dinner at a restaurant that revolved on top of a tall building. Then we went to the play.

He had an idea. To spare me from taking notes all night, he brought along a small tape recorder which he placed in the breast pocket of his jacket. But his heartbeat was the only discernible sound on the recording – at least that’s how I remember it.

The next day, I flew to Indianapolis to see another performance. The audience responded as enthusiastically as it had in Milwaukee. I wrote it all up, amused that a publicly-traded company worried about a modest play produced by a union.

But I did understand why the company wanted to defeat the film.

Our strategy was to compile long lists of editorial writers and film critics who worked in the largest cities and smallest towns, in every state, including student newspapers.

Then we telephoned, wrote letters, left phone messages, called back, rinsed and repeated. The goal was to generate bad reviews of the film and accusations of unfairness to the company. I’m sure that some writers responded to our pitch. After all, each side told a different story.

Ultimately, though, the movie became a box office success, garnering five Oscar nominations and a comeback for director Mike Nichols. The critics loved it.

Looking back, I’m struck by the idea of trying to change public opinion by laboriously making individual, local contact with members of the press!

Who could have anticipated social media?

So there we sat, in offices with darkly tinted windows, bearing down on journalists, marking the lists with checks, x’s, and question marks, trying to score one writer at a time; doing PR in 1983.