The 1918 edition of Notable Southern Families discloses that Edmond made his home with his maternal aunt, Rosalie. Of course that made sense. His mother, Laura McAdoo, had taken her own life in 1911 in Paris and his father, Oscar Triggs, was ensconced in a utopian community in California with his second wife.

Therefore, one might imagine that Edmond, then 17, lived with a dottering old lady on  the family plantation down in Milledgeville, Georgia, where the McAdoo family originated. That was not the case.

Rather, he resided with Aunt Rosalie on Riverside Drive in New York City. Rosalie’s husband, James, was secretary and treasurer of the Hudson and Manhattan Railway. He held the position by the grace of Rosalie’s brother, William Gibbs McAdoo, then serving as President Wilson’s Secretary of the Treasury.

Edmond went on to Columbia University and earned a BA, Master’s and PhD in English literature. Specializing in the history of American theater, he published several well-respected books and spent most of his career teaching at Bradford College in Haverhill, Mass.

His full name – Edmond McAdoo Gagey – gave a hint of his past but not a clear connection to his scandal-ridden parents, Laura McAdoo Triggs Gagey and Oscar Lovell Triggs.

One of six children in a family that found itself destitute after the Civil War, the beautiful, intellectual Laura made her way to Chicago from Knoxville where her father, William Gibbs McAdoo Sr., had joined the University of Tennessee faculty after the family fled Georgia. He and Laura were quite close from the time she was a little girl. He worried about her emotional intensity.

Professor Oscar Lovell Triggs, “the most picturesque member of the Department of English at the University of Chicago” (according to a popular journal), revered the work of Whitman and Browning. Students flocked to him because he was amusing and irreverent.

Laura enrolled at the university and took one of his classes. They fell in love and married in 1899.

Their son Edmond, born in 1901, spent his first four years in the university neighborhood of Hyde Park. John D. Rockefeller, Sr. had endowed the school a scant decade earlier and Oscar Triggs was among the first faculty members, having earned his doctorate there in 1895.

A proponent of the Arts and Crafts Movement which emerged during the late Victorian era, Oscar helped found the Industrial Art League of Chicago.

The movement started in England as a reaction to the machine age and, according to some critics, sentimentalized a time when laborers created useful things that also were beautiful and thus gave their work meaning. It celebrated craftsmanship in wood, pottery, metal, and other materials.

Professor Triggs believed that the Arts and Crafts Movement would create a “freer social order,” the elimination of the division of labor. With several friends, he also planned to open a tuition-free People’s Industrial College in Chicago. 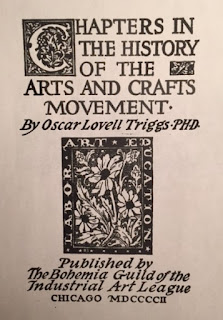 During this time, Laura McAdoo Triggs pursued her studies, joined the Arts and Crafts Movement, and published articles about patriotism, democracy, and higher education for women.

Then, unexpectedly in 1904, the University of Chicago dismissed Professor Triggs. Speculation abounded.

Was he “too radical,” a publicity-hound, or just a conceited jerk?

Of course, it was more complicated than that. Triggs’s critiques of church hymns (“inferior to Gilbert and Sullivan”) and Holmes, Lowell, and Longfellow (poets “of minor order”) were controversial. And his comparison of the creativity and significance of Rockefeller and Pullman to that of Milton and Shakespeare?

Well, he did explain what he meant – but really!

After Triggs was fired, or perhaps before, Laura discovered that her husband was entertaining “strange women on terms too close for friendship,” according to newspaper reports.

Laura filed a divorce suit, then moved to Paris with Edmond.

The 1907 trial made for delightfully sensational copy typical of its time. Named in the suit, Charlotte Minette Fagan, described as “a demonstrator of hygienic devices,” may have been “the owner of the dainty pedal extremity” – an “unshod and hoseless” foot that protruded from a quilt which covered a sofa where Professor Triggs sat en dishabille.

Away in Paris, Laura married Dr. Pierre Gagey, who had invented a device that would enable sick people to breathe, and moved with Edmond into the doctor’s large apartment on the elegant rue la Boetie.

The invention did not bear fruit, so the family found smaller quarters.

Back in Chicago, Oscar Triggs left his position as editor of To-Morrow, a magazine “for people who think,” where he earlier had the distinction of being the first to publish Carl Sandburg’s poems. A few years later, Triggs married a former student and went off to a ranch in California where he planned to write and farm.

Meanwhile, Edmond was growing up in Paris.