The Story of Negro Mystic Lore 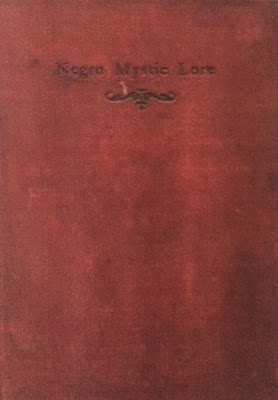 Advertisements for the book appeared exclusively in To-morrow Magazine, an early 20th century journal whose writers enthused about Socialism, atheism, and woman’s suffrage.

The “talented authoress,” an Alabama native named Mamie Hunt Sims, wrote with “a Pathos and a Sociological Insight” and “knew every touch of Negro Philosophy,” according to the promotion.

In passing, I assumed that Negro Mystic Lore, published in 1907, was written by a black woman.  Perhaps it explored stories told by former slaves and analyzed their African antecedents.

But now, book in hand, I realize that my assumption was absurd.  Negro Mystic Lore comprises 18 stories written in what linguists today define as African American Vernacular English.  In her foreword, Sims wrote that she hoped “to show the real kindly feeling that existed between the people of the South and the better class of the negroes.”

A character named Uncle Jake, based on a real person according to Sims, is the main voice in a series of interactions between “de collured pussuns” and “white folkies.”  He is a grotesque caricature:

You chillun is too interruptin enny how and ef you all don’t hush I gwine to hush my mouf and I ain’t gwine to tell you nuthin. I did low ter tell you some two or three nannydotes dis mawnin in case hits too naturally hot ter work dat garden an I mout as well be erestentin you chillun as gwin ter sleep under dat fig tree.

According to the sole notice the book received, Mrs. Sims originally created the stories as entertainment for her friends. “Her work is at once a memory of the ‘Old South’ in its pride and beauty, and a suggestion of the new and greater South flushed with the dawning of more glorious days,” wrote the reviewer.

The title page bears the quotation: “Dem dat has must give to dem dat hain’t.”

How did Negro Mystic Lore come to be published? The likely answer is that it was a favor granted by Parker Sercombe, editor of To-morrow Magazine who also ran a press.

The self-aggrandizing Sercombe (see earlier post), stood accused of many things but not bigotry. He had railed against South Carolina Senator “Pitchfork” Ben Tillman, a white supremacist who led a KKK-style terrorist group called the Red Shirts. He expressed solidarity with J. Max Barber, editor of the newspaper Voice of the Negro, who fled a white mob in Atlanta in 1907.

But it turns out that one of Sercombe’s friends, William Hill Hunt, had a sister named Mamie Hunt Sims who wanted to publish her stories. Sercombe obliged.

William Hill Hunt, born in Alabama in 1864, grew up in a family with some wealth in its past. He became successful in business at a young age. In 1902, he founded the Mexican Trust Company with a group of American investors. Around this time, Parker Sercombe also was active in banking in Mexico.

Like Sercombe, Hunt proved slippery. In 1905, the state of Illinois accused the latter of violating its banking laws when he accepted deposits from a bank that he knew was insolvent. Sentenced to Joliet Penitentiary, eventually he received a pardon from the governor.

Mamie Sims dedicated Negro Mystic Lore to her brother, thanking him for his support and encouragement.

The book is a nasty relic of racism written 44 years after the end of the Civil War. But it is typical of its time. During the Progressive Era, America’s white upper class perpetrated outrageous indignities against black people in books, music, and theater. The insults reflected the deep-seated, rationalized prejudices of educated whites.

During the Theodore Roosevelt administration, performers at the White House included Mary L. Leech, a soprano who performed a selection of “coon songs.” The German diplomat Baron Speck von Sternburg and TR’s Secretary of State, John Hay (once President Lincoln’s private secretary) were among the guests who applauded “You’se Just a Little Nigger, Still Youse Mine All Mine” and “Is Dat You?”

Although Negro Mystic Lore was published by an obscure press and scarcely advertised, my bet is that it was read widely.