****
There’s Dr. Leavitt and his son with the mesmerizing eyes, hurrying into a building on Washington Street. It’s Chicago, 1915, and they look dapper. They’re doing well. They’re riding a lucrative wave of American maladies.

The shelves are cluttered with books:

Psychotherapy in the Practice of Medicine and Surgery
The Absent Treatment of Disease with Particular Reference to Telepathy
The Essentials of the Unity of Life
The Psychic Solution to the Problem of Cure. . . Paths to the Heights . . .

and many more, all written by Dr. Sheldon Leavitt.

Then there are books by his son, Dr. C. Franklin Leavitt: Self Mastery Through Understanding,
Mental and Physical Ease and Supremacy, and Leavitt-Science. 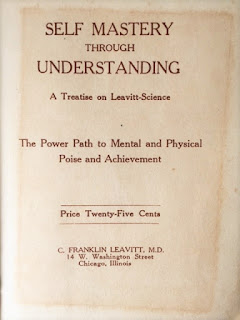 Talking machines – also known as record players, gramophones, and phonographs – became widely available in the United States around 1900 as the technology improved and consumer demand increased. Record sales soared with the spread of popular music.

In 1906, Mrs. J.H. McCorkle of Cody, Wyoming, requested no funeral service at all – just play a recording of “In the Shade of the Old Apple Tree” at her deathbed. That was a shock to friends and family. It even surprised the editors of Talking Machine World.

Back in Chicago, the Doctors Leavitt used talking machines for something completely different. They produced recordings of their voices which they sold along with pamphlets and books to promote what they called “Leavitt-Science.”

Americans have always searched for the one-stop solution.

The Leavitts capitalized on that wish. Leavitt-Science promised freedom from fear, anxiety, and illness by using “mental methods” to create will-power, confidence, and good health.

urged one of their advertisements.

Father and son practiced in Chicago, where both graduated from the Hahnemann College of Medicine. The German physician Samuel Hahnemann (1755-1843) is known as the “father of homeopathy.”

Both men claimed to have studied in Europe with “the best operators of the Old World,” including a renowned French neurologist, Jean-Martin Charcot. Records show that they traveled abroad in 1890 and 1895.

Upon returning from their last European trip, the Leavitts repudiated the use of drugs and surgery and began treating sick patients with a mix of spiritualism, therapy, and hypnotic suggestion.

CONSULT DR. SHELDON LEAVITT
WIDELY KNOWN AS
THE MIRACLE-MAN OF CHICAGO
He is doing wonderful work on patients in all parts of the country.

Indeed, their patients lived all over the country. This was possible because the men performed “absent treatments” using telepathy. In the case of an absent treatment, the doctor didn’t see – perhaps never had seen – the patient. The treatments usually involved recordings. In 1916, the Illinois Medical Journal reported:

Dr. C. Franklin Leavitt of Chicago, is said to have been remembered in a bequest to the amount of $100,000 by a Mrs. Paul of San Francisco, for “absent treatments.” The bequest is being contested by the heirs, and it may be “absent too.”

No wonder there were skeptics.

Notwithstanding, on went the Leavitts, making lots of money as indicated by their elegant homes and inclusion in the Chicago Blue Book.

After World War I, the doctors advertised that the U.S. government used their methods to treat cases of “shell-shock, wrecked nerves, fear, and general nervousness” among veterans.

Who knows, maybe they did cure a bunch of people.

This story brings back some memories. Of course, the Leavitts never treated me. But I did take a train to then unfamiliar downtown Chicago and found my way to a dim office and sat in an exam room with old wooden furniture and a grimy frosted window looking onto an alley.

It was 1977 and I was sick with bronchitis. The university I attended had a student clinic. So why on earth did I choose to visit a doctor whose practice was squirreled away in a nineteenth-century building in the Loop, reached by a small creaky elevator?

It’s been 39 years. I just can’t remember how I found this doctor and decided that he was the one to see. But he prescribed medicine and I got better, no hypnosis necessary. 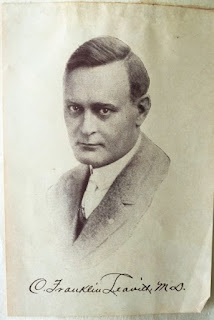