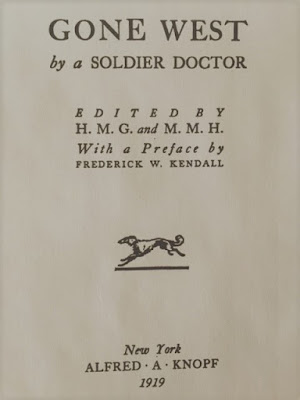 The Great War generated its own vocabulary:

“Kick the bucket” because men in the trenches stood on buckets to aim their rifles and often were shot down themselves,

“Lousy” because lice were everywhere,

“Basket case” because gravely wounded soldiers often were carried off the battlefield in baskets,

The expression “Gone West” – to die – may have originated in ancient Egypt because the uninhabited Western desert across the Nile was thought to be the land of the dead.

But it became very popular during World War I. In 1919, a book called Gone West, by a Soldier Doctor was published. Its authors were two middle-aged ladies in a small town in upstate New York.

Mattie Mitchell Hunt and Harriet McCrory Grove were old friends. In 1885 their families lived in the same building in Minneapolis. By 1900, Harriet worked as a librarian in Cedar Rapids, Iowa, and Mattie had married and lived in San Antonio.

Mattie’s maternal ancestors served in the Continental Army, so she made a few appearances in D.A.R. Lineage Books. Her father, Lester, started as a small-town physician and became wealthy as a director of two Midwestern railway corporations and a milling company.

Somehow Mattie met a financier named William Hill Hunt who hailed from Alabama. She was 26 years old in 1894 when they married and moved to San Antonio. From there, William pursued shady business transactions in Mexico. Their son and daughter were born in Texas.

The tale of William Hunt is full of deception. But he always picked himself up and went right on fooling his investors. *

Around 1900, the Hunt family moved to New York City. William continued his swindling ways and eventually went to prison. Mattie remained loyal until she learned of his serial infidelity. After a protracted divorce suit, she left him in 1912.

At that point, Mattie and her children took off for Hamburg, N.Y. in the far west part of the state near Buffalo.

Her friend Harriet had lived in Hamburg since 1903 when she married a roofing contractor named Frank Grove. It was his hometown.

In 1915, Harriet and Mattie started to collaborate on Gone West, by a Soldier Doctor. The manuscript would be a series of conversations with an older acquaintance who had died fairly recently.

Dozens of books about psychic phenomena had already been published in the U.S.  Spiritualists started captivating Americans during the mid-nineteenth century, and women especially were drawn to their performances. During these years, many hoaxes were exposed as well.

It’s easy to imagine Mattie and Harriet, sitting in a dark parlor figuring out the plot.

Or did the soldier / doctor really contact them? He had a lot to report. He told them to write it all down just as he communicated it from beyond. The two women and the doctor went back and forth telepathically. They used a technique called automatic writing, in which the writer acts as a receiver. She puts her pen on the page and starts to write involuntarily. Everything flows.

It’s kind of startling when that happens. Suddenly her pen was seized by an unseen force and the preceding words were written . . . as the doctor spoke loud and clear from across the Great Divide.

He had served in the Civil War and later became a physician. He died on Lincoln’s Birthday, 1915, and now he’s reaching out across the battlefields of World War I.

He describes to the ladies how he passes his days.

The thing that interests me most right now is the law of vibration. It is necessary to understand it to see how our worlds intermingle and still do not collide. The Astral Plane this is called.

He counsels them to prepare for going west themselves: You girls must study thought and ‘thought action’ constantly.

He communicates from a place where he comforts wounded and dying soldiers. When the war is over, the soldier / doctor bids the ladies “au revoir” and the book ends.

It surprises me that the book’s preface was written by Frederick W. Kendall, literary editor of the Buffalo Express. In fact, Kendall’s imprimatur made possible the book’s publication. “Mr. Kendall vouches for the good faith and integrity of the writers,” according to reviews.

I can’t help but wonder why Kendall endorsed such a flighty book while being married to a woman who was so seriously occupied in the here and now.

Ada Louise Davenport Kendall met her husband when she became the first woman reporter for the Buffalo Express. Initially angry about the hire, he eventually fell in love with her and they married. She went on to write a Sunday newspaper column, “The Garret Philosopher,” for 16 years.

The Kendalls also lived in Hamburg (with their four children).

While protesting outside the White House in 1917, Ada and five other suffragists were arrested and sentenced to 30 days at a prison workhouse in Virginia. Ada spent seven days in solitary confinement. She wrote to her husband, now city editor of the Buffalo Express, who published his wife’s descriptions of the horrendous conditions she endured and observed.

After her release, Ada continued to write and push for the vote. She became a heroine of the movement and was recognized widely for her success in journalism and as a poet.

I like to imagine the passionate, intellectual Ada, conversing with her pet parrot,

Mattie and Harriet, their pens in hand,

and Frederick Kendall, holding onto his hat as the wind blows off Lake Erie.