The Love Stories of Theodore Roosevelt

For several decades in American politics, all roads led to Oyster Bay, N.Y.   There stood the home of Theodore Roosevelt, a sprawling wooden house with deep porches named Sagamore Hill.

He presided over it for 33 years, even while he was off being Civil Service Commissioner, New York City Police Commissioner, Assistant Secretary of the Navy, a Rough Rider, Governor of New York State, Vice President, and – of course –a larger-than-life President.

Just before he died, he turned to his wife and said, “I wonder if you will ever know how much I love Sagamore Hill.”


Theodore had purchased the land in 1880, 155 acres overlooking Oyster Bay, the same year he graduated from Harvard and married “my own sweet, pretty darling” on his 22nd birthday.  He intended to build a home for a large family.

He hired architects to design a 22-room Queen Anne-style house, to be called Leeholm after his doll-like bride, Alice Lee Roosevelt.  But Alice died in childbirth in February 1884, after delivering a daughter whom Theodore named for her mother.  Coincidentally, Theodore’s own mother, Martha, died the same day.

Grief-stricken, he left the baby in the care of his sister, Bamie, and stormed off to the Dakota Territory believing that happiness had fled his life forever.

Before the harrowing departure, TR, as he would be known, ordered construction of the house to proceed.  But now it was to be called Sagamore Hill instead of Leeholm.

During the next year, TR spent most of his time out west at his ranch on the Little Missouri River.  He did not wish to see the beautiful child who reminded him of the wife he had lost. He could not bear to live in the house he had promised Alice Lee.  His political future – he had been a fledgling state assemblyman – was uncertain.

And yet, by late 1885, everything changed.  Incapable of living outside the arena, Theodore had moved back east, taken up residence at Sagamore Hill, and become acquainted with his precocious daughter.

Perhaps most significantly, he and his childhood sweetheart, Edith Carow, had started to meet in secret and made plans to marry.  This caused TR equal parts of exhilaration and agony.  Notwithstanding his generally progressive outlook, he was a Victorian at heart.  In the pages of his diary, he accused himself of inconstancy.

But he and Edith were passionately in love.  “You know all about me darling,” Edith told Theodore.  “I never could have loved anyone else.”

They married in London in 1886.  When they returned from Europe, Edith insisted that little Alice join their family.   Five more children would follow.  They all grew up together at Sagamore Hill, when they weren’t living in Albany or Washington, D.C.

Wherever “Father” went, excitement followed: riding horses, hiking, swimming, tennis; entertaining visitors, debating, reading aloud, and mischief.   It was always “Edie,” however, at the center of his life.

Many years later Alice Roosevelt reported that Edith, who could be very catty, once told her that TR would have been bored to death if his first wife, Alice, had lived.

Most likely Edith spoke the truth.  After all, she had proof.

While Edith destroyed every love letter that passed between herself and Theodore, evidently there was one that she could not bear to burn.  It emerged from hiding during the late 1970s when the writer Sylvia Jukes Morris was researching the first scholarly biography of Edith Roosevelt.  Theodore had sent it to his wife in 1914.

The story goes that TR, deeply disappointed by his failed Bull Moose bid for the presidency in 1912, asked his son, Kermit, to join him on an ill-considered expedition down the 950-mile River of Doubt in Brazil.  They embarked on the disastrous trip in 1913.  Battling malaria, dysentery and infection in the Amazon wilderness, Theodore at one point begged to be left behind to drink the poisonous contents of a vial he had brought along.

He wrote to Edith:

Oh, sweetest of all sweet girls, last night I dreamt that I was with you, and that our separation was but a dream; and when I waked up it was almost too hard to bear.  Well, one must pay for everything; you have made the real happiness of my life; and so it is natural and right that I should [be] constantly more and more lonely without you . . .  Darling, I love you so. . . .  How very happy we have been for these 23 years!

Of course TR did not drink the poison, but he returned to the U.S. with his body wrecked.  While he continued his interest in politics and wrote prolifically, his life quieted.  And then, in July 1918, the Roosevelts’ youngest son, Quentin, was killed in aerial combat over France.

“How am I going to break it to Mrs. Roosevelt?” TR asked the reporter who had brought the news to Sagamore Hill. 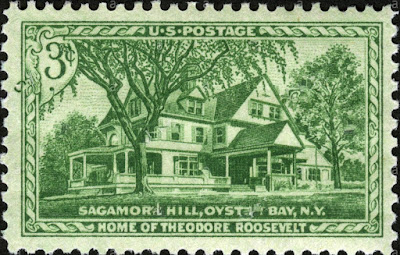 Less than six months later, “the old lion,” as one of his sons described him, died at the age of 60.  Now nearly 100 years have passed, and the anniversary of TR’s death falls on January 6, 2019.   It will be interesting to see how the centennial is recognized.

He lived a life of intellect, sorrow, and error . . . inquiry, imagination, and more.  There is much to admire and much to criticize.  Today, some historians believe that he showed symptoms of hypomania, which explains his restlessness, recklessness, and productiveness.

Having studied him informally for many years, I find his intense love of people and places more and more compelling.  Time and again, those deep attachments helped Theodore Roosevelt to right his own world.  Unironically they failed him -- one of the great warmongers of his age -- only with the senseless loss of his beloved son.

NOTE: Left-click on images to enlarge them.
at Wednesday, December 26, 2018