Summer is always hot as hell in the Plains States and that’s inscribed in his soul, for he was a boy in rural Kansas and a young man in Nebraska.

Now it’s July 1921 and Fred Hunter is ready to handle the heat of Iowa.  He’s on top of the world as he pulls open a bronze door to enter the lobby of the Hotel Fort Des Moines.  He’s ready for anything.

Fred is president of the National Education Association, the nation’s most prestigious organization of school teachers and administrators.  The 64-year old group’s annual convention is about to begin.

In and out of the hotel’s ballrooms and lounges, Fred will preside over five days of discussions, debates, and reports.  Four thousand participants are expected.  Most will arrive in time for “Educational Sunday,” as described in the official program: Homer C. Stuntz, Bishop of the Methodist Episcopal church of Omaha, will speak about “Educating the Other Half of the World.”

The next morning, in between greetings from college presidents and state officials, the group gathered for an Americanization pageant performed by children in the Des Moines Public Schools.  Since the late nineteenth century, the children of immigrants had been the focus of Americanization programs in the nation’s public schools.

Immigration slowed during the Great War but after the Armistice it surged again.  Consequently, Senators Albert Johnson and David Reed were busy drafting the nation’s harshest immigration law to date.  The Immigration Act of 1924 would encompass the Asian Exclusion Act and, using drastically revised quotas, slam the door on Italians, Jews, and Slavs.

Back at the convention, female teachers and male administrators discussed salaries, tenure, visual and music education, daylight in the classroom, rural school consolidation, the creation of the junior high school, and educating the Negro.

The leading topic was student health and hygiene, including the trachoma epidemic* and proposals for sex education.  Nearly 20 sessions were devoted to health issues.

But the real buzz at the convention concerned something else entirely:  the application of business practices to schooling.  Educational administrators had fallen under the spell of efficiency.

Styling themselves as executives, the schoolmen – as they now liked to call themselves – sought better ways to monitor truancy and supplies, keep costs down, and standardize teaching practices.  They wanted more student testing.  They wanted to account for every red rubber playground ball.

And so school administrators shifted their emphasis from education to efficiency.  As school districts grew larger, the schoolmen called in experts and ordered surveys.  Not until the thirties did the trend start to wind down, although arguably it never went away entirely.

Fred was an adherent of the education efficiency movement, but he didn’t stay a schoolman.  He had set his sights on higher education soon after kicking off his career in Lincoln, Nebraska, where he served as superintendent of schools between 1912 and 1917.

During those years, as popular culture stormed across the country, Fred voiced deep concerns.  He worried about the movies, dance halls, and penny arcades where wide-eyed youngsters learned about divorce, adultery, suicide, drinking, and robbery.  Teenagers were dancing the Tango and the Maxixe.  Church socials had been swapped out for bowling parties.

Fred called for “a constructive program to control the amusement instinct” – build more playgrounds and sponsor activities at local schools.  Insist on vocational guidance for each student.  Establish an “efficiency list” comprised of reliable girls and boys who are available to perform tasks for local merchants. 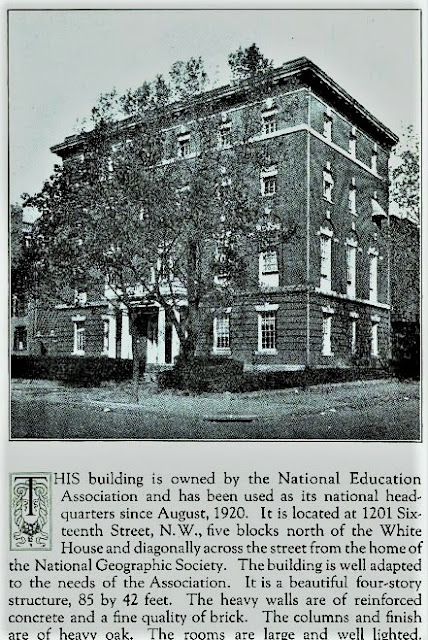 But he probably didn’t want to keep wrestling with social deviance and the health crisis in the public schools.  As president of the University of Denver and chancellor of the Oregon Higher Education System – he would hold both positions – he could largely detach himself from those problems.

So here’s to Fred, president of the National Education Association, slamming down the gavel on July 3, 1921.  He welcomes everyone to the glittering new ventilated hotel and jovially shakes hands with his fellow schoolmen.

Despite the sobriquet “Roaring Twenties,” the decade was disastrous for immigrants, minorities, and poor people (although very good for business).

The schools were besieged by single-issue influencers ranging from the American Legion to Nativists to the Women's Christian Temperance Union.  The teaching of history became a battleground. The juvenile justice system meted out thousands of sentences.  For many public school students, it was the worst of times.

*Trachoma is a contagious disease of the eye that can lead to blindness.  Many thought it was brought to the U.S. by immigrants, but it also proliferated among white Appalachians and Native Americans.