Welcome to the Collage 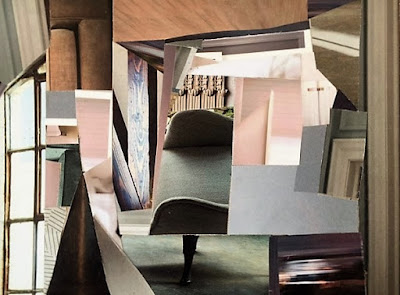 During the past year, I’ve returned to creating collages from cardboard and magazines, an art first learned in a class at the Rhode Island School of Design.

We were encouraged to check out an exhibition of faculty work. On the wall beside one painting, someone had scribbled in pencil, “If this painting could talk, it wouldn’t say anything.”

Everyone floated in and out of the dormitory rooms. Coming upon a group of friends, you would start by saying, “Hey people. . .” It took me a long time to shake that habit.

We girls wore peasant blouses and faded jeans with holes in the knees. Everyone roamed over College Hill, the beautiful green neighborhood that encompasses Brown University and most of RISD.

But coming around to collage – that was what I learned best that summer.

We started with a shirt cardboard cut in half. Nowadays many men request that their laundered shirts be returned on hangers but in those days folded in a box was typical; thus the cardboard.

The vast tables in the sunlit studio were covered with magazines, wallpaper books, and fabric.

The professor kindly persisted with me even after I produced several pieces that weren’t at all what she wanted. They were patchworks of color that looked like quilts. She dismissed them as pretty pictures.

Playing around one afternoon, I realized that a collage is a place to go. Step inside, it says, come on in. There’s music playing. It’s calm. It’s crazy. It’s a day in the country. It’s a room in a house where you can sit and look out the window.

The collage starts with large shapes that fall into place because you know where they belong.

You already can tell that it’s autumn because of how the light falls across the floor.

Or it’s winter. The sky is full of snow which means there’s all the time in the world as it was when we were growing up.

It’s the end of the day at the beach when the wind picks up and the sun wheels toward the horizon.

Or you want to be alone.

That’s life inside a collage.